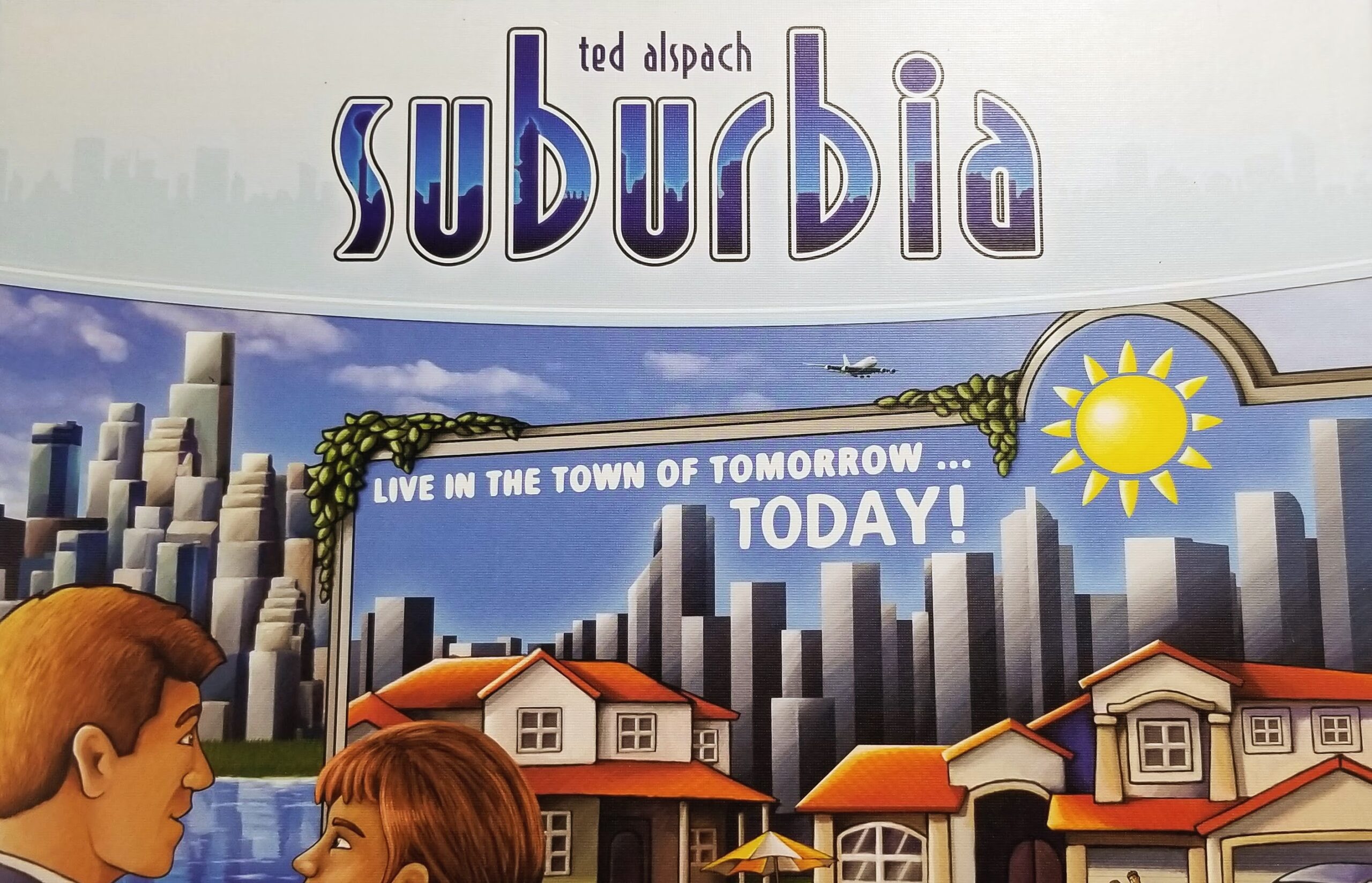 Looking for a step up from Monopoly? Try your hand at building an entire city! Suburbia was released over ten years ago and has stood the test of time. Players work as city planners placing different types buildings into their borough. The challenge comes from placing tiles in locations where they will give you the most benefit. Placing a restaurant in your town will increase revenue to your farm, but placing an airport near your residential area is not going to make your residents happy. You’ll be tasked with making many of these choices which affect both your city and your opponent’s cities as the game progresses. If you like a good economic game, you really should checkout this modern classic.

Suburbia is a tile laying game with a city building theme, released by Bezier Games in 2012. Most experienced players consider it to be a medium on the complexity scale, but if you are new to this type of game you may find it overwhelming at first. The game has 100 different tiles that you can place in your city and almost all of them involve interaction with other tiles when they are played. Once you get used to reading the tiles they are pretty easy to figure out, but the game also comes with extensive instructions that fully explain each tile if you have questions.

All players start with a player board and the same three starting tiles; a suburb, a park, and a heavy factory. Across the top of the player board you can track your income and reputation, which will go up and down based on the tiles that you place. The player boards are two-sided allowing you to build your city from the top down or from the bottom up, depending on your preference or available space.

Notice that regardless of how you place your board the suburb is placed closest to your board and the heavy factory is the farthest away.

You’ll also notice that the income track is denoted by circles and the reputation track uses squares. The tiles use these same shapes to let you know when the effect of a tile impact your income or your reputation.

On each turn you will be taking a tile from the market and placing it in your city. To take a tile you must pay the cost listed on the tile plus the cost listed above the tile on the real estate track. Once a tile is taken the tiles slide to the right to fill in the gap and a new tile is placed in the $10 space. You draw all of the A tiles, before moving onto B and so on.

You can also take one of the basic tiles found center of the market for just the cost listed on the tile.

Below the basic tiles you’ll see between two and four public goals (based on the number of players) which will score at the end of the game. These goals will be things like “Have the fewest residential tiles”. These are well worth focusing on, they are worth a lot of points.

Below is a sample city. You are allowed to place tiles anywhere you like as long as they border an existing tile on one side (as you can see, you can even go above your player board). In our example, our Domestic Airport tile decreases our income by one (upper right of the tile), then increases our reputation by one per airport (+2) then reduces reputation by 1 because it is next to a residential tile. Our Municapal Airport increases our income by one for every airport so when we add the Domestic Airport it gives us one additional income also. After all is said and done, our income and reputation both go up by one.

See what I mean, it’s a lot to keep track of, but after a few rounds it will get easier.

There is a lot of interaction between the player cities. There are tiles that will give you a benefit for other tiles in YOUR city, and some tiles give you a benefit for tiles in EVERY city. For example, if you have a slaughter house in your city you get additional income for EVERY restaurant built, not just your restaurants. There are tiles with both positive and negative effects that work this way, so you need to be paying attention to what is being built in your opponents cities.

This game is all about planning and combos. You want to place tiles that work well together and try to keep your opponents from getting tiles that synergize with what they’ve built. There is a lot to think about in this game, which may be why it was winner of the Mensa Select award in 2013.

The game has quite a bit of setup, but the rulebook contains very clear step-by-step instructions for this. There is also a separate booklet that explains the details of each tile and how it is played. This makes the game much easier to setup and play.

The game also comes with very good player guides which act as a “cheat sheet” to remind you of the steps to take on a turn and what to do when placing a tile.

One of the common criticisms of Suburbia is there is a lot of bookkeeping involved in the scoring. Each time a new tile is placed you have to evaluate how it scores based on all of the tiles around it, and also the tiles in your opponents cities. This can be a lot to get used to at first, but as your experience with the game grows this will get easier.

The game takes up a lot of space. In addition to needing space to place your growing city, the market and the population board both also require a lot of room. You’ll need a good sized table to play a four player game.

This is mitigated slightly by the fact that the market board is in multiple pieces that can be placed together like I have pictured, or you can separate it and place the sections whenever you have room on the table.

Suburbia has a lot of options and tile interactions that players must consider. If there are players in your group that are prone to “analysis paralysis” the it could really slow the game down. This is exacerbated at higher player counts. It may not be an issue for your group, but it’s something to consider if you play with people who get boughed down when making decisions. This also tends to be less of an issue as players get more experience with the game.

Is Suburbia Worth the Money?

Suburbia has been around for ten years for a reason! It is a great game that requires a lot of strategic thinking, and since you randomize the tiles in play, the game is a little different each time. It is a good quality game with lots of replayability. The second edition of the game (what you’ll most likely see in stores now) has improved artwork that was created for the collectors edition and looks really nice.

The images in this post are all from the first edition of the game, I’m actually considering repurchasing the game to get the artwork in the second edition, it’s that much better!

Check the current price of suburbia

Are There Expansions for Suburbia?

There are several great expansions for Suburbia. There is plenty of game in the base set, but if you play the game a lot you may want to add the additional modules available in these expansions. These used to all be sold separately but they can now all be purchased in the Suburbia: Expansions box. This set includes the following expansions:

The biggest change in this expansion is the addition of border tiles. Think of these as long tiles with a straight side and spaces on the opposite side for tiles (much like your player board). These are hard to accommodate in your city, but provide benefits that make them worth the effort. The expansion also adds new building tiles plus bonuses and challenges that help give you a direction on what to build in your city. Many people consider this a must have expansion for the game since the bonuses and challenges help the mid-game move along.

This expansion add new tiles that are tourist attractions and a “star rating” track that is an additional scoring mechanism. When you use this expansion, in addition to income and population you’re trying to create the highest rated city. The expansion is fun, but as we mentioned there is already a lot of bookkeeping in this game and adding the additional “star rating” track adds more overhead without too much additional value.

The nightlife expansion adds new tiles that are some of the less desirable locations to have in your city, like pawn shops and prisons. These tiles have a upside, but also a downside which adds an interesting new dimension that you need to balance.

Where to Find the Suburbia Expansions

Can You Play Suburbia Online?

There is a digital version of Suburbia but it is not available for free. The game can be purchased for iOS or Android for $7.99.

Suburbia is a great game that is worth the effort to learn. If you are a fan of games like Sim City, Suburbia will be right up your alley. The expansions add some interesting depth. The expansions can all be mixed together, but I would suggest playing with at most one expansion at a time. Using more than one expansion removes too many of the base tiles from the game, and you need a good number of them to get good synergies.

If your family is a fan of Monopoly this is is a great step up in the Economic genre. It may seem like a lot at first, but the rulebook and player guides will help you along and it will get much easier the more you play. Suburbia is a modern classic and is a game you should try. Happy city building!