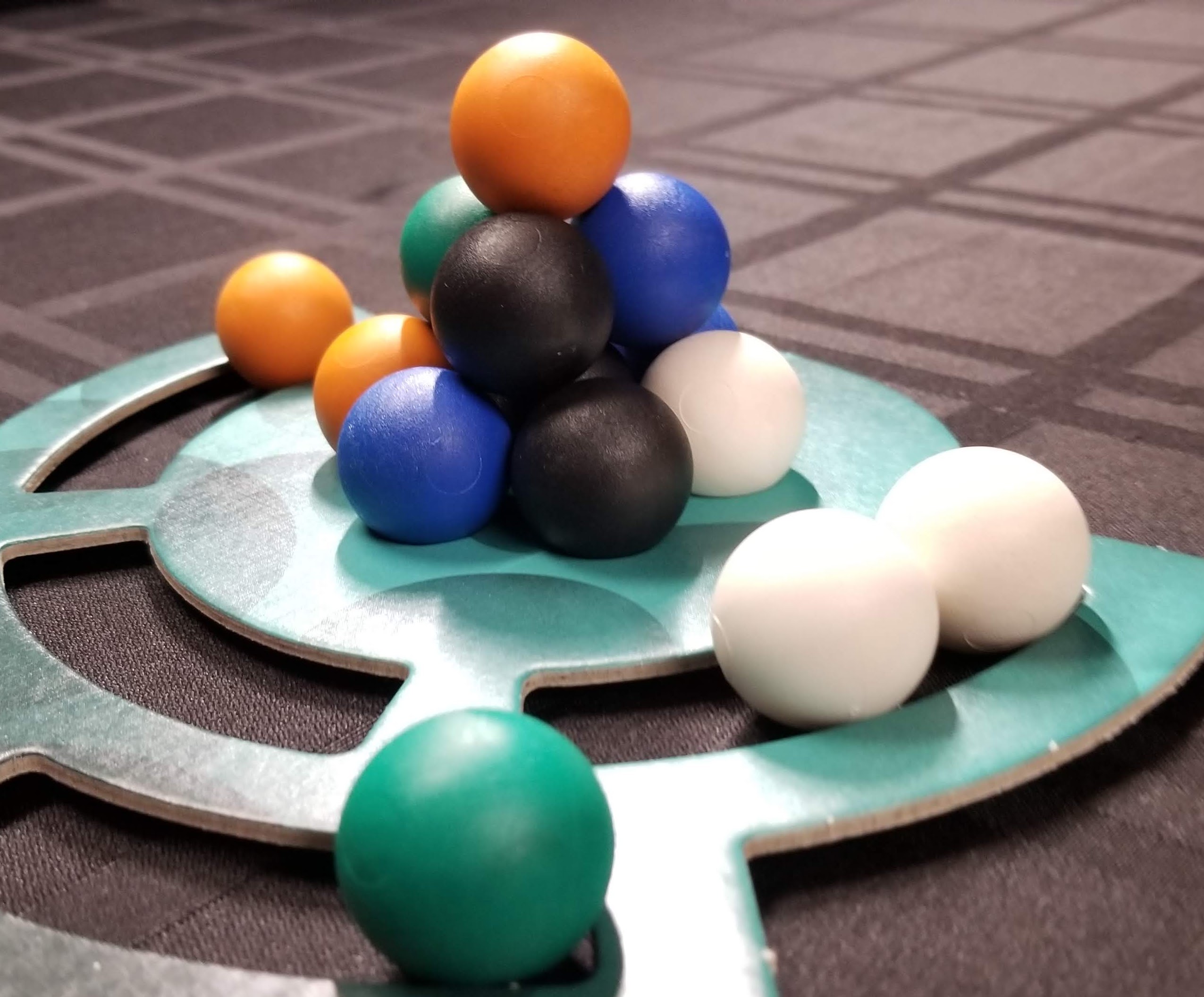 A few years ago while walking through the main hall at a board game convention in Grand Rapids, Michigan, we came across a man setting up for a tournament of Dimension, a board game we’d never seen before.

The tables were filled with brightly colored balls, which caught our attention and prompted us to stop. He promised to teach us the game in 5 minutes, and true to his word, we had the basics down in no time. We didn’t enter the tournament, but we did leave the convention with a copy of the game.

My goal with this post is to take less than five minutes of your time, to introduce you to this fast-paced and unique game. Ready? Let’s go!

Dimension is a fast-paced innovative three-dimensional puzzle game for two to four players. The game is played in a series of six, one-minute rounds. In each round players must use their set of 15 colored balls (three of each color) to create a pyramid that conforms to the rules for the round.

Did I mention the rules are random? In each round six cards are dealt from a deck of rule cards and these haphazard (and sometimes contradictory) rules govern your structure.

The rules of Dimension change every round but all of the potential rules fall into one of the following categories:

Color Placement: Rules like “White must touch green” or “Orange can’t touch blue” or “Blue can’t be above any other color”

Total number of color used: Rules like “Exactly 2 blue” or “Total of orange and white must equal 3”

Number of a color in relation to another color: Rules like “More black than blue”

Based on these cards, In this round:

If it’s the first time playing it’s best to explain each of the rules so that everyone understands what the cards mean. As people get more familiar with the game they will understand the graphics and this may no longer be needed.

What do you do if you get contradictory rules in Dimension?

This can happen and does fairly regularly. It’s entirely possible to get “Green must touch blue” and “Green can’t touch blue” in the same round. There are a couple of ways to deal with it. In our example you could:

Both are valid but you only have sixty seconds to build, so decide fast. You can also choose to put back one of the rules and redraw if you don’t want to have contradictory rules, but we keep them in when we play.

How to Play Dimension

How is Dimension Scored?

A player receives one point for every sphere on their stack. These points are given out before the rules are checked. A completed stack accommodates eleven spheres so that is the maximum number of points you could get in a round.

Players then lose 2 points for every rule broken. It doesn’t matter if you break a rule multiple times, it’s a straight deduction for breaking the rule.

Players that manage to not break any rules and use all five colors in their pyramid receive a bonus token. Additional points are gained or lost at the end of the game based on how many bonus tokens you have.

The game comes with tokens for keeping track of the score (and bonuses). You pass them out based on the number of spheres used, and players pay them back when they break rules.

Is The Game Dimension worth the money?

Dimension typically retails for around $40 and is well worth the money. It’s a game that is probably unlike anything else you have on your shelf and it’s quick to teach and play.

The components are nice except for the scoring tokens which are small pieces of cardboard. The size and material can make them a bit difficult to handle and since they are passed around so much that’s a small downside.

The other components of the game are really nice, it’s a shame that the scoring tokens don’t follow suit.

Can Dimension be played solo?

Solo gaming options are becoming more popular, and while the rules do technically include one for Dimension – it’s an afterthought. While some games like Wingspan include an entirely different ruleset for solo play, Dimension’s is basically “play by yourself, keep track of your best score and try to beat it next time”

Dimension is a game that hits our table frequently. It’s great when you want something easy to teach and quick to play, and it’s a unique departure from your standard “board game”. It’s a great game to play with friends or family that don’t typically like board games, but it also provides a challenge for more seasoned gamers.

I would highly recommend adding Dimension to your board game collection. I don’t know if I got that all out in under five minutes or not, but I hope you found it helpful!