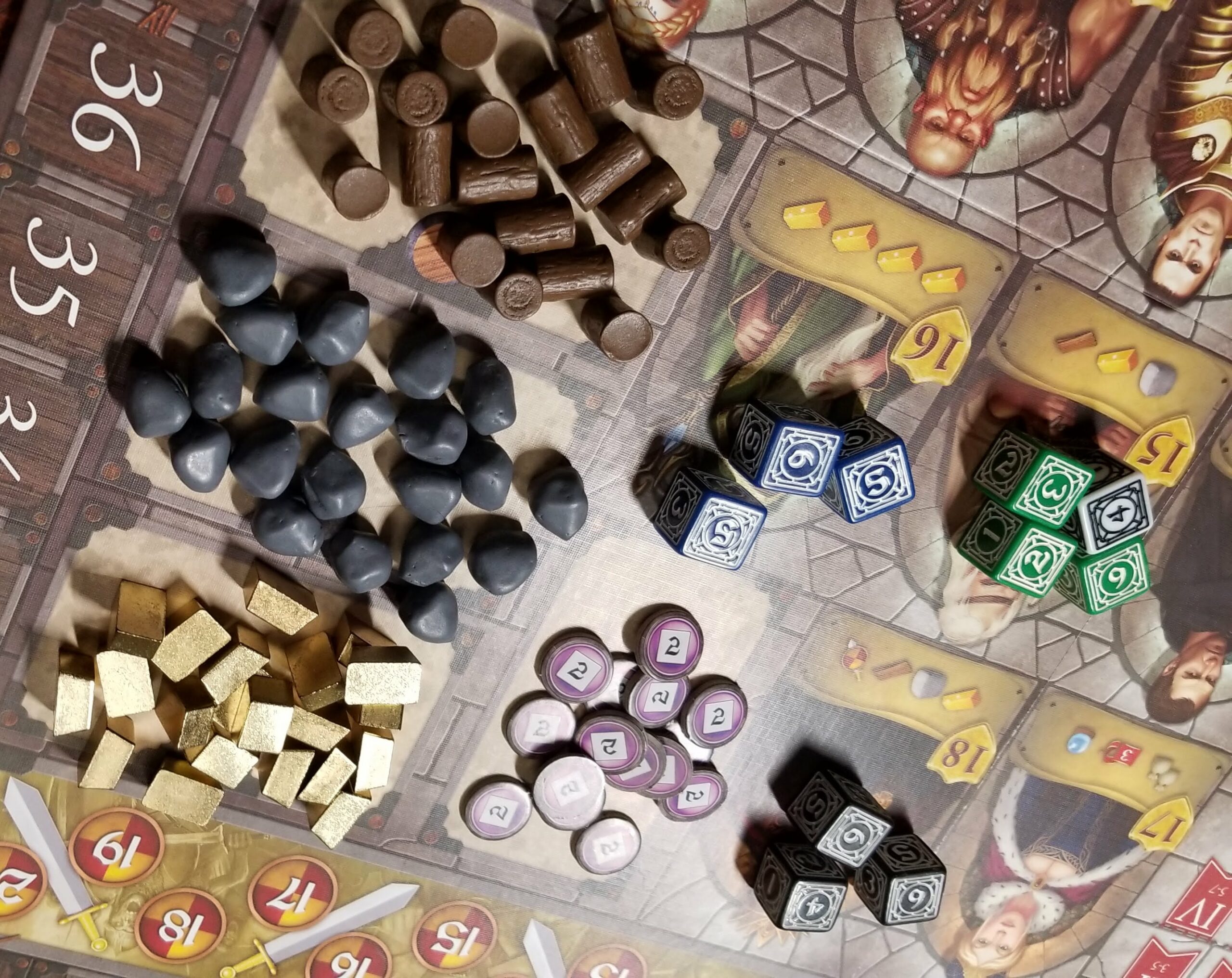 If you’re a fan of worker placement board games, then you’ll love Kingsburg! This game takes place in the medieval era, and tasks players with acquiring and managing resources while helping the King build up his kingdom and defend against invading enemies.

There are many different ways to win the game, making it a challenge for even the most experienced players. In this post, we will discuss the basics of the game and give you some tips on how to win.

So put on your armor and get ready for battle!

What type of game is Kingsburg?

Typically in a worker placement game each player has a number of workers (traditionally depicted by meeples) they can send out to gather resources or perform actions. Kingsburg is different because you are not given meeples, you are given dice, and your “buying power” each round is determined by how you roll. This injects a bit of randomness into the game which will keep you shifting your strategies often as you make the best possible use of the dice you have.

The game takes about an hour to play with experienced players (closer to 90 minutes if you’re new). It can accommodate up to five players, and is recommended for ages 10 and up.

How to play Kingsburg

When you first start to setup this game it can look complicated and overwhelming, but stick with me.

In this game you are playing as the Governor of a Province and each player will have their own Province board. This board will show you the different kinds of buildings you can build, the cost for each, and the benefit gained by having them.

You signify that you have built something by placing one of your tokens in the circle for that building on your board. When you build something you immediately get any victory points associated it and move your token along the outside victory track. If you lose a building (yeah… that can happen) subtract those points on the victory track. This way everyone can see how they’re doing and you’re not left doing a bunch of math at the end to see who won.

In order to get the resources you’ll need to build your Province, you’ll need to influence the King’s advisors. Each advisor has a numeric value which typically corresponds to the value of what they can provide you. In order to visit an advisor and collect their resources you will need to place dice with a value equal to their number on their space.

The structure of a round

Kingsburg is played over five rounds, with each round signifying a year. As such each round in divided into seasons, starting with Spring. Spring, Summer and Autumn are all considered “productive seasons”; the players will roll their dice, influence advisors, and have the opportunity to build.

Before each season there is a pre-season phase (for lack of a better term) where a player will get some kind of reward based on their current standing in the game. The “pre-seasons” exist to reward players who are doing well, or help the player who is furthest behind.

In the winter the invaders attack. The invader deck consists of five cards of increasing difficulty. Players will have an idea of how powerful the invading army will be each year due to a strength range on the back of the card (ie year 1 is between 3-5). Some advisors have scouts, and if you visit them you’ll have the advantage of being able to look at this card to know exactly what’s coming and how strong it is.

You can also use your visits with the advisors to increase you’re military strength. This is something you don’t want to ignore. It is possible to lose buildings in the winter if you fail you repel the invaders, and while all players will get some military assistance from the King, how much he sends depends on the roll of the dice, so he can’t always be counted on.

Kingsburg is about balancing your time and resources to build what you can and to protect what you have built.

Are there expansions for Kingsburg?

Kingsburg was originally released in 2007 with an expansion Kingsburg: To Forge a Realm released two years later. On the tenth anniversary of the game a new edition was released that now includes the expansion. It is nearly impossible to find the original printing now (blue box) as long as you pick up the second edition (brown box) it will include the expansions.

Is Kingsburg good with two players?

Technically, you can play Kingsburg with two player but it’s best with four or five. In a worker placement game there are a limited number of spaces players can go to to get resources. It ups the tension and changes the strategy if there are more players vying for those spaces.

What are the best strategies for winning Kingsburg?

The game is full of strategic choices and it’s unlikely you’ll be able to win by just doing one thing well. You’ll need to balance what you’re trying to do with what your opponents are trying to do, as well as using the dice efficiently.

Stone is the hardest resource to get – when you get a chance to take a free resource, consider taking stone.

Build your Inn early – The Inn gives you a token that allows you to modify your dice roll. The sooner you have the Inn, the more of these tokens you will get.

Don’t forget to build some military – This is less important early game as those battles will typically be easier. You can probably get by with defensive buildings and the King’s roll. As the game progresses though the fights will get harder, and if you’re not careful, you just may lose that building you spent the whole game working to build.

The Farm is powerful but it has hidden costs – The farm has a HUGE benefit, an extra dice! It takes a while to build AND it gives you -1 in battle, so it basically negates the value of one of your defensive buildings.

The Queen is more valuable than the king – The Queen offers resources, victory points AND a peek at the battle. When you have a large roll, she is often the better choice over the King.

Kingsburg is an excellent worker placement game that has stood the test of time. With great artwork, solid mechanics and enough player interaction to keep things interesting, it’s easy to see why this is such a popular game. If you’re looking for a fun, family-friendly strategy game, Kingsburg should definitely be on your list.