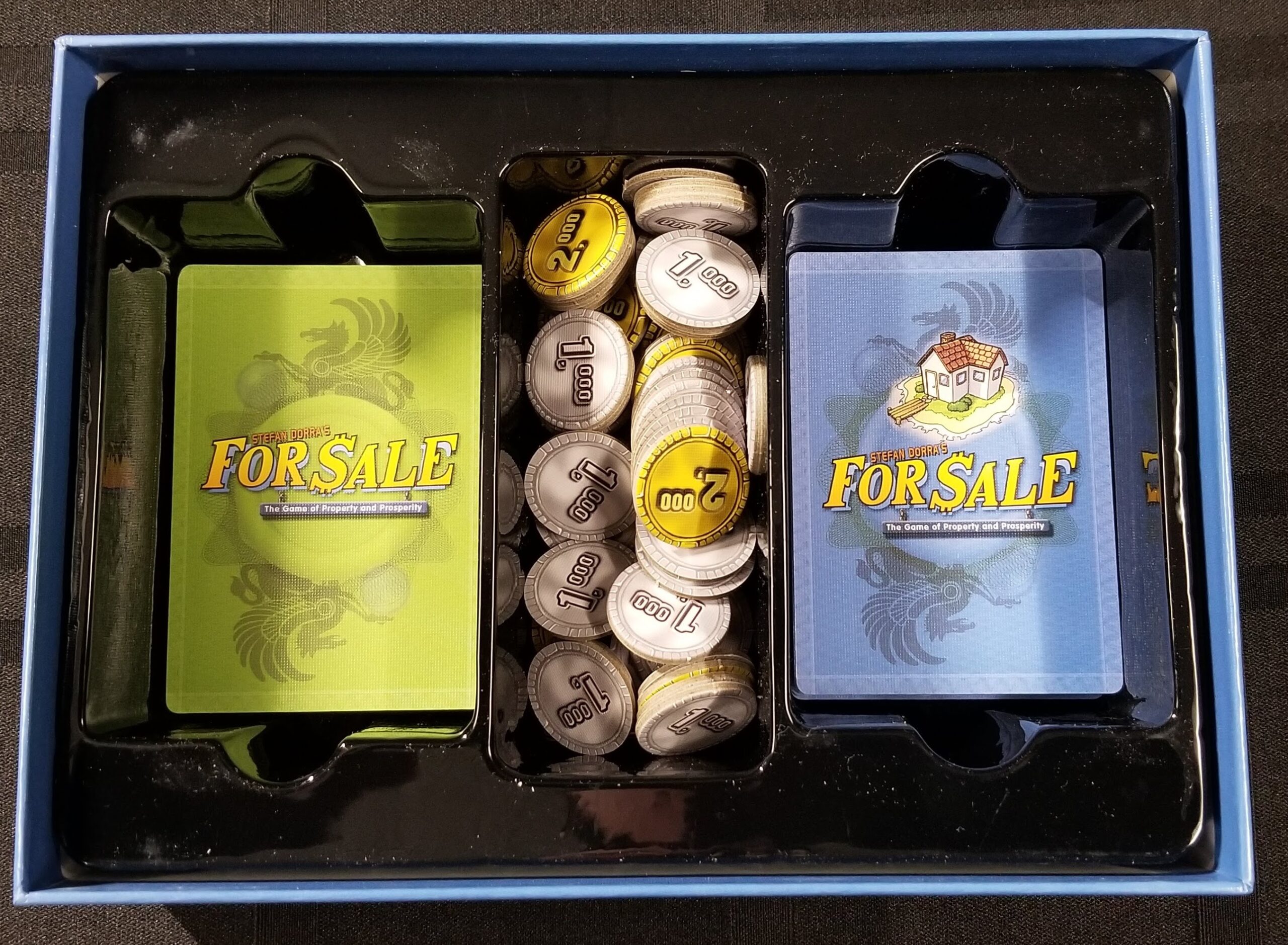 For Sale is a light, easy to learn card game with a real estate theme. If you like Monopoly but don’t want to commit to a long gaming session, For Sale may be a good fit. This game also hits our table when need a mental break between two heavy strategy games.

That’s not to say For Sale is not strategic, it certainly can be, but it won’t consume all of your attention. You will still be able to easily socialize while you play.

In this post we’ll give you a good overview of the game so you can decide if For Sale is something you want to add to your game shelf.

How to setup For Sale

Setting up For Sale is easy! There aren’t many components or steps involved. The game comes with 60 cards (divided into two decks) and 72 coin tokens.

Give each person an amount of money based on the number of players.

The game consists of two decks of cards; property cards (green backs) and currency cards (blue backs). You’ll need to randomly (without looking at them) remove some cards from each deck and put them back in the box.

Shuffle the cards and you’re ready to play!

How to play For Sale

For Sale is played in two phases. In the first phase players will bid on properties that are available at auction and in the second phase they will sell them. The goal being to buy low and sell high. Money that you don’t spend in the buying phase also counts toward your score, so bid carefully!

In the buying phase you’ll be using the green-backed deck, which consists of 30 numbered properties. Properties in this deck range from a cardboard box (1) to a space station (30).

To start the buying phase, determine the starting player (by whichever method you choose) and hand them the green-backed property cards. That player will deal a number of cards face-up on the table equal to the number of players, and then make the first bid.

Play then continues clockwise around the table; each player can either bid higher than the current high bidder or pass. When a player passes they take the lowest value property left in the set. They also get to take back half of the money they bid (rounded down).

Let’s look at an example round!

In the first round of bidding:

The winning bidder deals out the next set of property cards and places the first bid.

This continues until you’ve gone through the entire property deck

Once all of the properties have been purchased the selling phase begins!

Now take the currency deck (blue-backed) and deal out a number of cards equal to the number of players.

Continue this until all of the properties are sold.

Have each player add up the value of their currency cards, plus any coins they didn’t spend during the buying phase. The richest person wins! If there is a tie, the tied player with the most money in coins wins.

Our Review of For Sale

For Sale is a great game that is easy to learn and fun to play. There is a decent amount of strategy involved in both phases of the game. You have to decide when to bid properties up, and when to strategically pass. In the selling phase you must time when to play your low value properties to maximize your profit.

We also like this game because it’s a good six player game. It can be difficult to find good games at that number, and For Sale is a great option. The components are well made and the artwork is nice. For Sale will likely be in our collection for a long time.

Is For Sale Worth The Money?

The game usually runs about $25. At that price I think the game is a bit expensive for a card game with little else in terms of components. That said, it’s a fun game that definitely has a place at our table. The components are well made and should last a very long time.

Since the game quick to play, people usually want to play multiple times. It’s a good game in social situations since it’s not too mentally taxing, and as I mentioned it’s a good game for six players which is a hard to find. The included storage solution is good as well. I would say the game is worth the money especially if you like games with a financial theme.

You will see this game put on sale from time to time, but I’ve rarely seen it for less than $20 so you likely won’t save much by waiting.

Are there expansions for For Sale?

There is one expansion available for this game called Advisors. The expansion adds a third phase to the game that occurs before the buying and selling phases. During this new additional phase, players bid to hire advisors that will help them in the second and third phases of the game.

Each advisor gives the player a special ability they can perform which will aid them in future rounds. The Sales Associate for example, allows the player to get their entire bid back instead of just half. This expansion is available from Eagle Gryphon Games.

They also sell metal coins for the game, but they cost almost as much as the game itself. I’m a sucker for good components, so I may pick these up. Adding these metal coins and putting sleeves on the cards would greatly increase the life of the game.

Can I play For Sale Online?

Yes! You can play For Sale for free online at BoardGameArena. This is a great way to quickly play the game with friends, or to see if you like the game before buying it.

In my opinion though, nothing beats playing games in person.

Overall For Sale is a really good game that is perfect for people who want to try a game with a real estate theme without things getting too complicated. The game has high replay value and can be played online for free which makes it easy to get into. If you’re looking for something new to add to your collection, I would recommend giving For Sale a try!