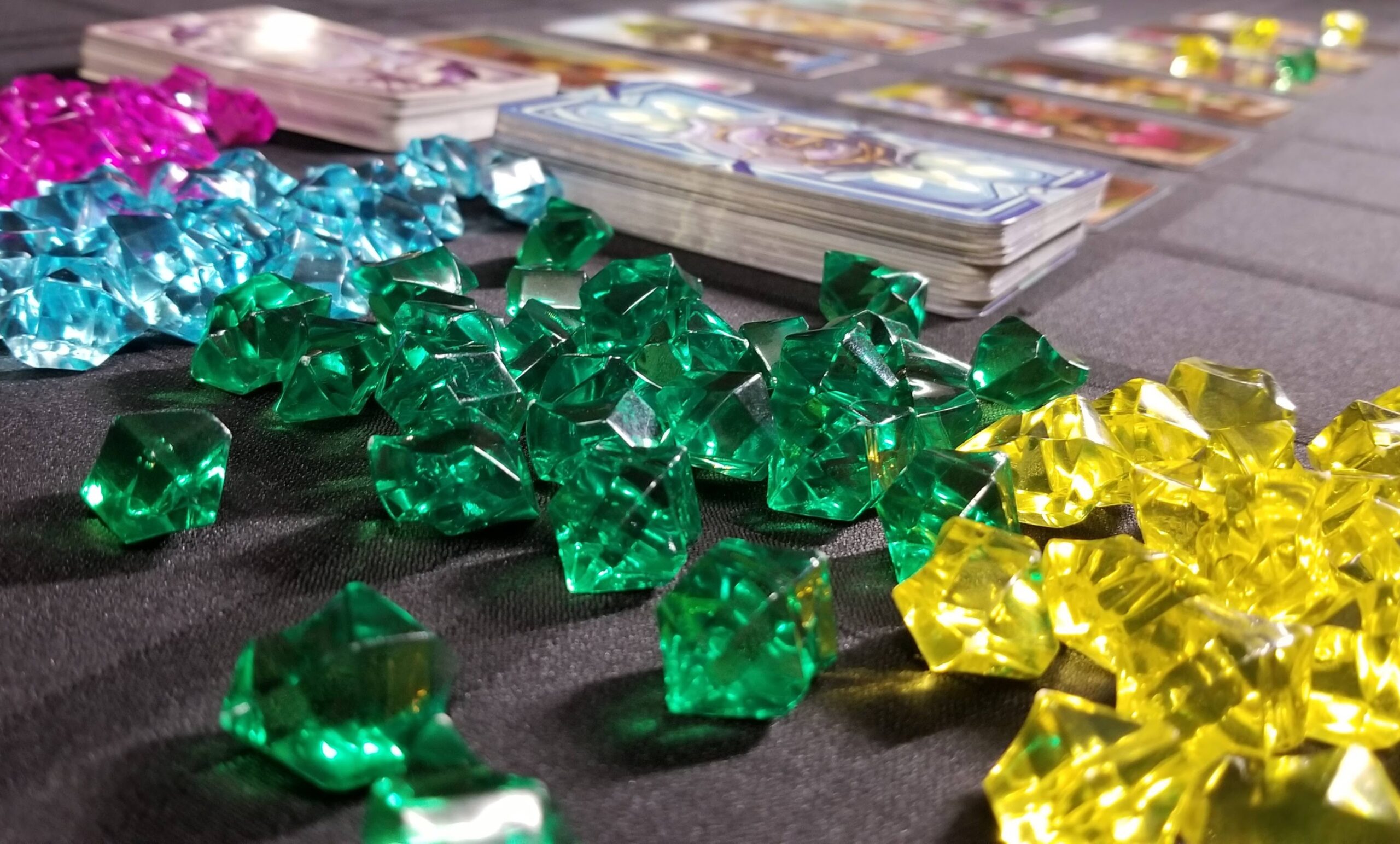 This is one of my favorites! We have yet to teach it to anyone who hasn’t loved it, and it’s probably the game people request the most at game night. I’ve even taken this game to work to play at lunch and had a co-worker immediately go online and buy the game upon returning to his desk. I know, I know, it sounds like I’m overselling it. I’ll be shocked it you think so after you try it.

Century Golem Edition is an engine-building game released by Plan B games in 2017. Even though you are building a deck of cards, I classify this as an engine builder and not a deck builder because there is no drawing a hand from your deck. You have access to your entire deck, with the only restriction being once you’ve played a card you can not play it again until you spend a turn to regain all of your played cards. This is different than a game like Dominion where you draw a hand of cards from your hand each turn and must make your best possible play using those.

The game is mechanically identical to Century: Spice Road but with the components and artwork changed. It was originally meant to only be released as a convention exclusive edition but people loved this version so much it got a larger release and two additional games that can be played alone or in combination with one another.

How to Play Century

Like many games, the object of Century Golem Edition is to be the player with the most points at the end. You get points by obtaining Golem cards which have varying point values based on how difficult they are to get. You get Golem cards by paying the gems listed on them, and at. any given time there are five Golem cards available for purchase.

When a card gets purchased all of the cards to the left of it slide down one position and a new cards is turned face-up closest to the draw deck. The cards furthest from the deck have coins above them which are worth additional points. This gives players an added incentive to purchase cards that have slid all the way down that no one wanted The card furthest from the deck is worth an extra three points, the one to it’s left and extra one point (I actually think in my picture I have the copper and silver coins reversed in my photo, check your rulebook).

I mentioned that some Golems are harder to get than others, This is because there is a hierarchy to the gems, the easiest gems to get are the yellow ones, followed by green, then blue with pink being the rarest. So in the example above the card that requires 5 pink gems is worth the most points. How do you get gems you ask? Well, you either have to mine for them, or trade for them.

Each player starts with the same two cards. When you play one of these cards, you get to take the action shown on the card. If you play the card on the left you get to take two yellow cards from the supply. If you play the card on the right you get to upgrade you gems two levels. This can be spent on one gem (turning in a yellow and getting a blue) or it can be split across two gems (turning in two green and taking two blues). Once you play a card it stays on the table face-up and can not be played again until you use one of your turns to rest. When you rest you get to pickup all of your previously played card and they are available to you again.

Since you only get to play one card per turn, it would take a long time to get the gems you need if these were the only two cards you had, that’s where the market comes in. Instead of playing a card on your turn, you can instead take one of the six available cards on the table. Just like with the Golem cards, when a card is taken all of the cards to the left of it move down one space and a new card is placed closest to the deck. You can take the card furthest from the deck for free; if you want one of the other cards you have to pay a gem on every card you skip to get to the card you want. Players who take cards with gems on them get to keep the gems as well.

On your turn there are four possible actions you can take,

You get to take ONE action per turn and that’s it. You can not play a card and buy a golem card on the same turn.

Once someone buys their fifth golem card that signals the end of the game. You finish the round and then count your points. Throughout the game the number of golem cards you have is public information, but their values are private (keep them facedown). Players will have to try to keep track of what people have purchased to know if they are ahead or behind.

Easy to Teach, Fast to Play

The instructions for this game are one page front and back (and that includes illustrations). You just have to teach people how to read the iconography on the cards, go over the four possible actions, and explain the scoring and end game trigger. This game can be taught in about five minutes. Also when you’re playing with experienced players the game can move pretty fast. I put my cards in order so I know what my next 3-4 moves will be so when it’s my turn I already know what I want to do.

Even though the mechanics are simple, the game is not. You’ll not only need to keep an eye on which market cards are available, but also which gems your opponents have. If you know what they have, you can determine which point card you think they are going after. Since you can only do one thing per turn, if someone is ahead of you on a specific card you’ll need to pivot your strategy. If you don’t notice that, you’ll waste turns.

The components are fantastic. We bought this version over Century Spice Road (the same game with a different theme) because the gems are super cool. Playing with high quality components really enhances the experience! The storage system in the box is good as well, there is a place to keep all of the cards and coins as well as a cover for the gems so they don’t roll all over the place.

Every time you play the game the market cards available will be different, you’ll need to formulate your strategy based on the synergies available. Having a cards that make you a lot of blue gems are not that useful if there are not ways to convert blue gems into something else, for example. You’ll also need to adjust your strategy based on what your opponents do. This game never feels stale, and continues to be one of the most requested games with our gaming groups.

As I mentioned before you can easily queue up your turns so you know you pretty much always know what you’re planning to do next. It’s easy to do this and also keep a conversation going at the table, the game doesn’t require your undivided attention.

I have not seen an online version of the Golem Edition but you can play Century Spice Road at Board Game Arena. This is the same game except you are trading spices instead of gems. The main reason I like Golem Edition better is for the components, but this doesn’t matter when the game is digital.

Is Century Golem Edition Worth The Money?

100%. We have yet to introduce this game to someone who didn’t like it. It is a go-to game when I’ve got a group of five or less, and is one of our most requested games. Most of the people we have shown this to have purchased it.

There is no official rules for Century solo play. I’ve heard rumors that there is a fan-made solo ruleset with a Pandemic theme, but I have not come across it.

Are There Expansions for Century Golem Edition?

I have not played either of these yet, which is crazy. I’ll be trying them soon and will put out full reviews.

The Golem Edition is mechanically identical to Spice Road. It’s exactly the same game with different artwork and components. The components in the Golem edition are far superior and in my opinion it’s the version you should get.

This is an incredible game. That’s all there really is to say, I don’t have any criticisms of it. Everyone we have shown it to has enjoyed it, and most people have purchased their own copy. Very highly recommended!