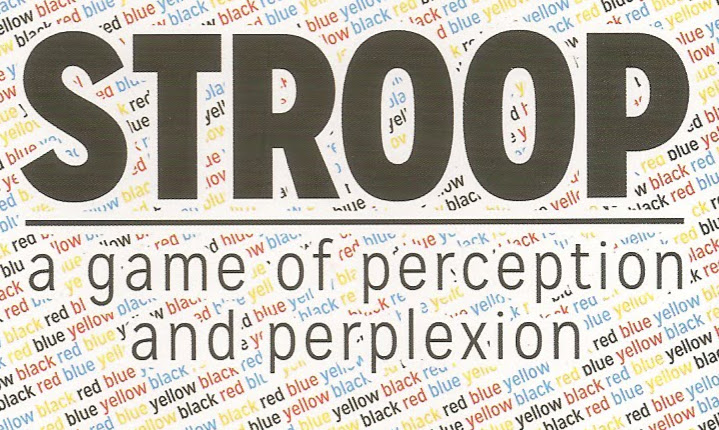 Stroop is a unique card game that is both a filler, and a brain burner. Christin and I had the opportunity to play it with the game designer before its official release at Grand Con in 2017. I have a background in Psychology so this game was very interesting to me as the main mechanic exploits something known as the Stroop Effect. In this post, we’ll talk about this very cool card game and how it works.

What is the Stroop Effect?

The Stroop Effect is named after American scientist John Ridley Stroop who wrote about this phenomenon in 1935. The theory relates to a delay in processing time that exists when the brain is presented with two contradicting pieces of information and must filter one of them out.

For example, let’s say I presented you with the following list of words:

If I asked you to read the words as quickly as you could, you likely would not struggle too much, but it would take you longer than if the words were all in black text.

If I then asked you to name the COLOR of the FONT, and not what the word actually said, this task would take considerably longer.

See the Stroop Effect in Action

You may have used the list above to attempt the experiment yourself, but if you’d rather see a demonstration, watch this news anchor attempt it!

This is the Stroop Effect, and it makes for an interesting game of cards. Let’s take a look!

How does the game work?

Stroop is a real-time game, everyone plays at the same time and the players are all trying to get rid of their cards as fast as possible. In this game, with the way human brains are wired, the cards are designed so the Stroop Effect will slow you down!

The cards all contain words that can be used to describe the other cards. The words are written in different colors, and a font that is either solid, hollow, lowercase or uppercase. The cards will say one of the following things that refer to a specific aspect of the card you are describing.

In the first round, each player is dealt a pile of 20 cards. The top card of the deck is turned face up.

Players pick-up cards from their pile and put them into their hand one at a time. There is no limit to the number of cards you can have in your hand at once, but you must pick them up one at a time.

In the first round, players must play a card from their hand that is described by the top card on the discard deck.

Here’s an example of valid plays:

Each of these cards can be played because the card on the table SAYS red and the card being played IS red. As people play cards the top card of the discard pile keeps changing and you’ll need to change the card you play.

Once a player has gotten rid of all of their cards we move on to round 2.

In the second round, any players who have cards left from round one keep those cards. New cards they are dealt are added to these cards, Players make a new draw pile as before and pickup cards one at a time.

In this round players are looking to play a card that describes the card on the table.

Here’s an example of valid plays for round 2:

These cards are valid because:

You are looking for a card that SAYS what the card on the table IS.

The first player to get rid off all of their cards in round two (including their leftover cards from round one) wins the game!

Our thoughts on the game

Stroop is a game I would normally put into the “filler” category. It’s quick to teach and quick to play. For a filler game though, it really is a brain burner. People who like speed-based “race” games will probably like this because fighting the cognitive dissonance adds a layer that other games of this type do not have.

This is a love it or hate it type game though, in my opinion. Some people are not going to enjoy how hard they have to work to get rid of their cards. This is not a leisurely, causal filler game. You have to pay attention and be engaged.

Can you play Stroop Online?

I am not aware of anywhere this game can be played online.

There isn’t much to give you in the way of strategy. You’re trying to play as quickly as you can and fight to filter out irrelevant information.

I do have one tip though. In the first round, I read what the card says (in our first round example “Red”) and I look at the cards in my hand and say to myself “This card is Red” which helps me remember I am looking for a red card. It seems simple, but things get confusing fast.

In the second round I look at the discard and say to myself “That card is…” and try to find a card in my had that can finish that sentence.

Is Stroop Worth the Money?

Stroop is a bit expensive for a game that is just a deck of cards. I would normally expect to see a card game like this sell for $8-10 and you can usually find this one for between $15-20.

I do feel the game is unique enough to justify the additional cost for people who like this type of game. For a less expensive option, the publisher does offer a print and play version of the game for $3.99.

Thoughts on the Second Edition

The game underwent a redesign since the edition that we have, making the cards more square and adding a “burning brain” logo to the center of each card. Personally, I think someone gave Johnathan bad advice with the addition of the logo to the cards. The image takes up more than half of the card real estate, adds no value, and pushes the information you need to the edges of the card.

I get why they did this from a marketing perspective, but it’s unnecessary in my opinion. I like the first edition cards better. They did add cards in the reprint that you put out in each round to remind players what constitutes a valid play. I think this is a nice addition, because it’s easy to get lost in the chaos.

I don’t think the new printing actually says “second edition” or anything similar, “second printing” is probably more accurate description, but you’ll know if you’re getting this version if you see a burning brain on the box. The box I have looks like the image at the very top of this post.

I think that Stroop is a great game for people who want something that is simple, but challenging. The game moves quickly, but it takes a lot of thought to concentrate on just the information you need. Even though it’s a bit on the expensive side for a simple card game, it is unique enough that I still recommend you give it a try if you like this style of real-time, race-to-the-finish game. I’m glad we have it on our shelf.

Pick up your copy of Stroop at Amazon