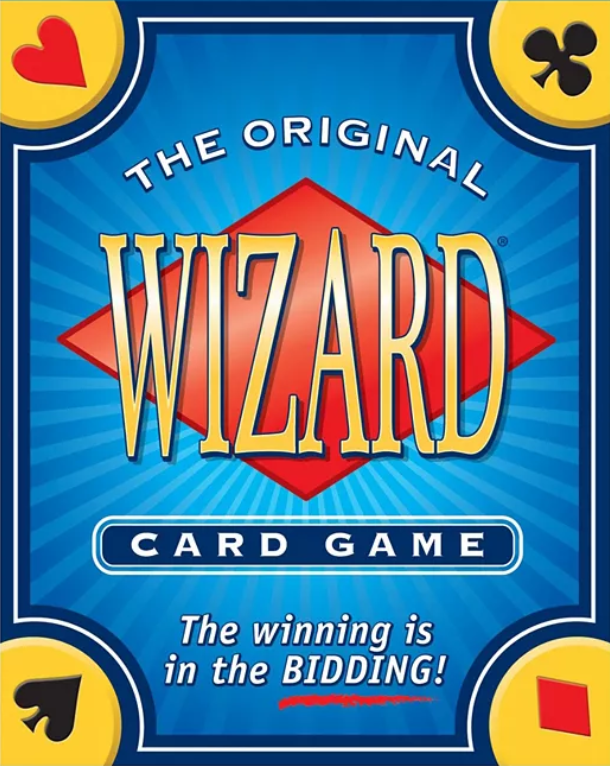 If you enjoy trick taking games like Spades or Euchre you’ll love Wizard. Wizard is a card game for 3-6 players created by game designer Ken Fisher and originally released in 1986. This game frequently hits our table, especially at family gatherings. The game is well balanced and elegantly designed. By adding just two additional card types to a standard deck the player’s strategic options are improved significantly, and the scoring is designed to reward players who make larger bids.

How to play Wizard?

The object of the game is to correctly guess the number of tricks you will take in the round. Players who successfully take the number of tricks they bid are awarded 20 points, plus 10 points for every trick taken. Players who bid incorrectly lose ten points for every trick they miss by (whether they go over, or come up short).

The game played with standard deck with the addition of four Wizard cards and four Jester cards. Wizards are the highest card in the deck; Jesters are the lowest. If two Wizard cards are played on the same trick, the first wizard played wins. As with most trick taking games players must follow suit, but they don’t have to follow suit if they are playing one these cards.

The game consists of 10-20 rounds depending on the number of players. In the first round each player is dealt a single card and they receive and additional card every round. After the cards are dealt, the top card of the deck is turned over to determine which suit is trump. If a Wizard is turned over, the dealer gets to choose the trump suit, if a Jester is turned over there is no trump and the highest card of the suit lead will take the trick (Wizards still beat all).

After looking at their cards, each player predicts how many tricks they believe they will take, ranging from zero to the total number of cards dealt. This is recorded on a score pad.

Play then starts with the player to the left of the dealer; any card can be led. The highest card (Ace is high) of the suit led takes the trick. Don’t forget about the Wizard cards though! The Wizard card beats everything else; the first Wizard played is guaranteed to take the trick. The Jester is is guaranteed to not take the trick and can be a good out since you can play it even if you have the suit led.

What the players must play depends on the card led

How is Wizard Scored?

If you’re a fan of trick taking games like Spades, Euchre or Black Out you will most likely like Wizard. The addition of the Wizard and Jester cards add some additional strategic choices since you can play them even if you have the suit led.

Can you play Wizard with two players?

The original Wizard game requires a minimum of three players, but they now make a version that can be played with two players. The two player version is actually called Two Player Wizard. We haven’t tried this version yet so I can’t speak to how it compares to the classic version.

Can you play Wizard online?

Our goal is to encourage people to play games together, in person, but yes you can play Wizard online at sites like BoardGameArena. Playing online is a good way to confirm that you like the game before buying a physical copy.

Is the game Wizard worth the money?

Yes, the game is pretty inexpensive, you should be able to find it for less that $10. Like any card game that is played frequently the cards will eventually wear out, but they are inexpensive to replace. The best prices I’ve seen for this game are over at Amazon.

If you’re looking for a good trick taking game I recommend giving Wizard a try. It’s simple to learn, yet has enough strategy to keep things interesting. And it’s just fun to say “I bid 9 tricks” … and take them all!