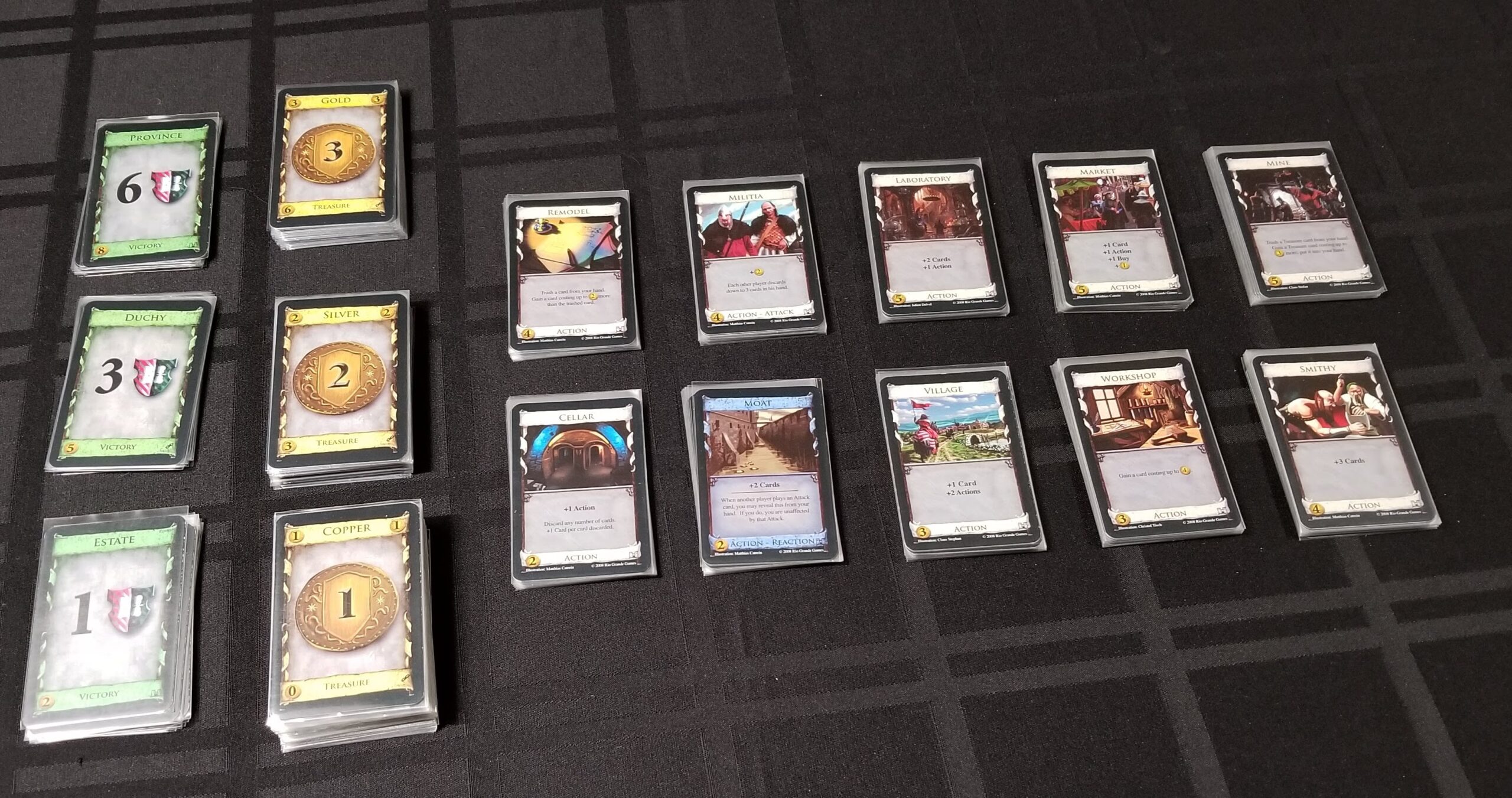 If you’ve read about us, you know that it was a deck building game that propelled us further into the board gaming hobby. It is one of my favorite types of games and one you should check out as you improve the collection on your shelf.

In this post, we’ll explain what a deck building game is, show an example of one, and help you decide if it’s the right kind of game for you.

What is a deck building game?

A deck building game is a type of tabletop strategy game in which players compete against each other using custom-built decks of cards. Each player begins the game with a set of basic cards, and throughout the game, they acquire new cards building a stronger and more effective deck. These games typically feature several different card types, each of which has unique abilities or effects.

How are Deck Building games different than collectible card games?

In a Collectible card game (CCGs) like Magic the Gathering, players build their decks before the game. The player will usually purchase booster packs of random cards to build up their collection.

In a deck building game, the players start with the same pre-determined set of cards and your deck is built during the game. Players use the starting cards to purchase new cards, which are then added to their deck.

Ultimately, both CCGs and deck-builders offer a unique and rewarding gaming experience. CCGs are typically a much more expensive hobby because the cards are purchased in booster packs much like baseball cards; you have to buy a lot of packs to get the cards you want. Alternatively, you can buy the cards you need individually but doing so is a lot more expensive.

In general, I prefer deck-building games because in a collectible game often the person who spent the most on their deck wins. With a deck builder all of the cards you need come in the box, everyone starts with the same deck, and the game truly comes downs to strategy (and a little luck).

An example of a deck building game: Star Realms

There are lots of great deck building games out there, but one of the best games for players new to this genre is Star Realms. In Star Realms each player starts with 50 authority points and a deck of ten cards consisting of 2 Vipers (which are used for combat) and 8 scouts (which provide money, which the game calls trade). You’ll shuffle your deck and draw a five-card hand which will give you some combination of attack and trade.

There will be five cards in the center of the table that are available for purchase. Each of these cards will have unique abilities that you can use when they are played on future turns. Some of the cards are bases that stay out for multiple turns until they are destroyed. These cards provide ongoing benefits, so when your opponent has them out, you’ll want to get rid of them.

Any card purchased goes immediately into the player’s discard pile. Once they have gone through their draw deck the discard pile is reshuffled and players will start to see the cards they’ve purchased in their hands.

One of the reasons I recommend this game to beginners is because it will teach you all of the basic deck-building mechanics without layering on a lot of additional rules like a game like Dominion does. In Star Realms you can buy as many cards as you can afford, you can use all of your attack and there are no restrictions on how many cards you can play or can buy.

Don’t get me wrong – these added rules are part of what makes the more advanced deck builders fun to play and you should check them out as well, but for your first deck builder Star Realms is a great (and inexpensive) place to start.

There are a few reasons that deck building games have become so popular in recent years.

One of the main reasons is the ability to control your destiny. In most board games, players are limited by the number and types of cards they draw each turn. This can often lead to frustrating moments where it feels like you’re not making any progress.

In a deck building game, players have a lot more control over their hands because they choose which cards to add to their deck. This gives players a lot more agency and makes the game a lot more replayable.

Another reason for the popularity of deck building games is the amount of player interaction. In most board games, players take turns and there is very little interaction between players.

In a deck building game, players are constantly interacting with each other as they try to acquire the best cards for their deck. This makes the game a lot more social and a lot more fun.

Other popular deck building games you should try

It’s a classic. This is the game that really propelled us into the hobby. We were introduced to Dominion over 10 years ago and we still play it on a regular basis. Seriously, pick up the base set and give it a try.

This is the cheapest way to get into a deck builder. The game runs about $15 and each copy you buy accommodates two players. Give it a go with two players and if you like it you can get up to two more boxes to make it a six-player game. Buying three copies makes it about as expensive as Dominion but you can try it out for cheaper.

Deck building games are a lot of fun and they offer a unique experience that you can’t find in other board games. If you haven’t tried one before, I highly recommend giving them a try. There are a lot of different deck builders out there, so you’re sure to find one that’s right for you. They’re easy to learn, replayable, and a lot of fun. If you’re looking for a new board game to try, I highly recommend picking up a deck building game. You won’t be disappointed.