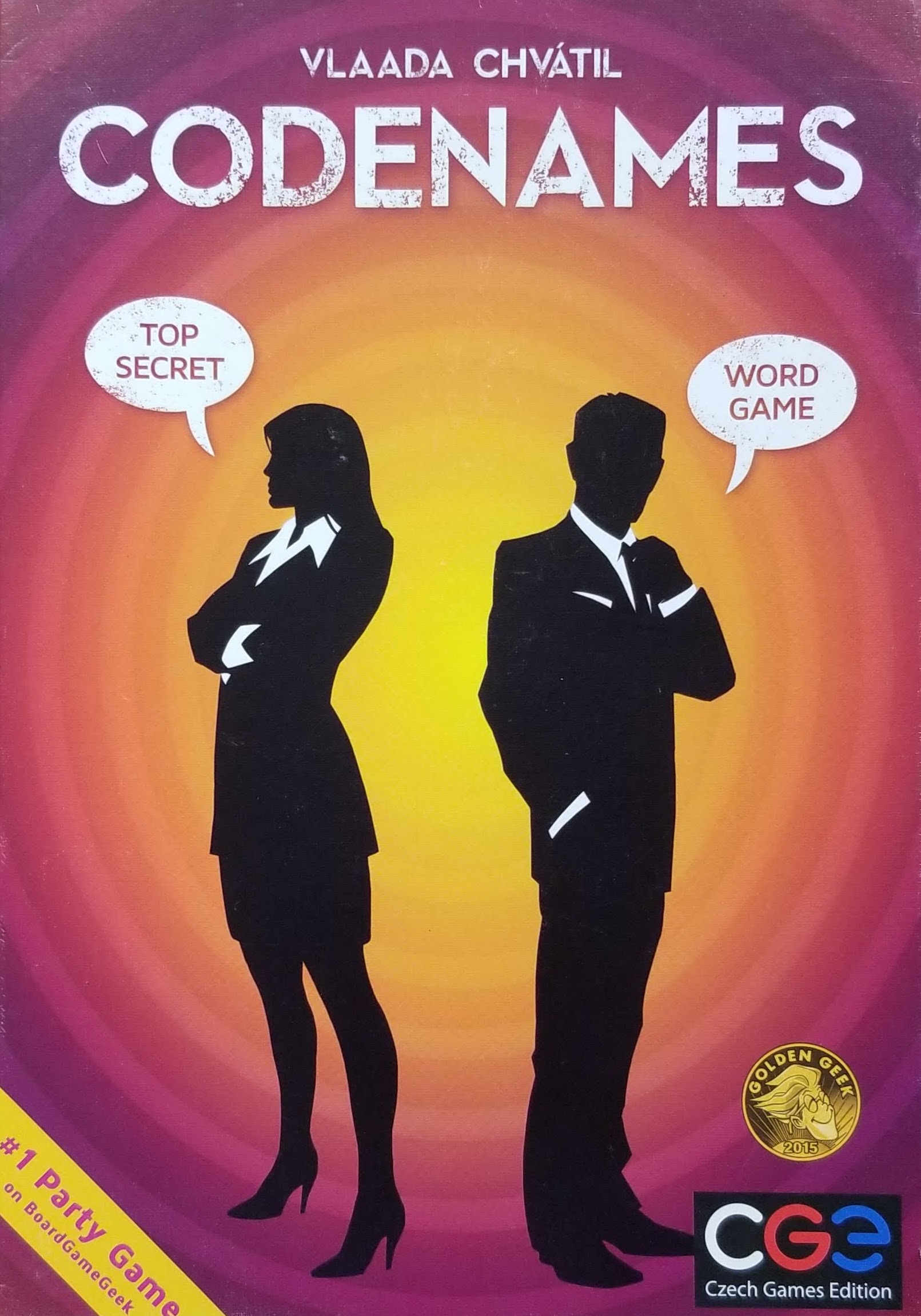 If you haven’t played Codenames yet, you should really give it a try. Codenames is one of our goto games when we have a large group. Codenames is essentially a guessing game that is easy to learn and quick to setup. This is good because people tend to want to keep playing again and again.

Divide your players into a Red team and a Blue team, deal out 25 cards and you’re pretty much good to go. We play this game a lot, and it is frequently requested at gatherings.

If you’re looking for a new party game to play with your friends, look no further than Codenames!

How to play Codenames

Codenames is a relatively simple game to play. First, divide the players into two teams. Deal word cards onto the table in a 5×5 grid, then each team picks a clue giver. The clue givers look at a shared key card which tells them which cards on the table are the ones assigned to their team.

Here’s an example of a key card:

It’s important that the clue givers agree on which row on the card maps to which line on the table. Often people agree that the row at the bottom of the card is the row of words closest to the clue givers, but it doesn’t matter what you decide as along as you agree.

The key card also has what looks like a light or siren on the edges of the card. That is the team that goes first. That team also has to guess an extra word (since going first is an advantage).

When giving clues the clue giver can say one word, and a number. Nothing else.

The word is the clue and the number is the number of words on the table to which the clue giver thinks the word applies.

For example, if my team had the following words to guess:

As teams guess words you cover them with a tile that matches that cards color on the key card (there is a two sided Red/Blue tile that is given to the team that goes first). The first team to run out of tiles of their color wins the game.

Why is the game called Codenames?

If you read the instructions you’ll see that Codenames has a spy theme. The theme is weak, unnecessary and completely irrelevant to the game. They could have chosen anything. The extent of the theme is that you cover your words with tiles that have a picture of a spy on them and they say you’ve “Found one of your agents” by guessing their codename.

The card that makes the a team lose the game if guessed is called the “Assassin” card. That’s it for theming. The only thing the theme did in my opinion is allow the publisher to give the game a cool name.

The game doesn’t need the theme, and when I’m teaching it, I generally leave the theme out entirely unless I’m asked why there are people on the tiles.

Can you play Codenames with two players?

The original Codenames game requires at least four players to play. There is an alternate edition called Codenames: Duets that is designed to be played with two players.

Are there expansions for Codenames?

There are a lot of different editions of Codenames, but only offering that would be considered an expansion is called Codenames: Deep Undercover. This expansion adds additional word cards of an adult nature, much like Cards Against Humanity.

The expansion was released in 2016 exclusively at Target Stores, but is now available at places like Amazon as well.

Alternative versions of Codenames you might want to try

With the popularity of this game there have been a number of licensed editions of this game. Unlike the expansions these are stand-alone games and you don’t need the original game to play them. There is Codenames: Duets (a two player version), Codenames Pictures, Harry Potter Codenames, Marvel Codenames and Codenames Disney.

You’re sure to find an edition of Codenames that works well for your family or gaming group.

Can I play Codenames online for free?

Yes! If you want to try Codenames before you buy it there is an online version available at codenames.game. Honestly though, it’s a party game, it’s best in person.

Is Codenames worth the money?

Yes, Codenames is definitely worth the money! The game is relatively inexpensive and runs around $18. It’s a lot of fun to play, and it is a great game for a large group. We often struggle to find good games for groups larger than six, but when we need one, Codenames is always on that list.

From a components standpoint it’s basically a card game, and the cards will eventually wear out, but the game does not require frequent shuffling so the game should last a long time.

If you haven’t played Codenames yet, we definitely recommend picking up a copy. It’s the perfect game for parties and get-togethers with friends and family. The gameplay is simple enough that anyone can understand it, but it’s not easy.

The game says that it plays 4-8 players but since it’s played in teams it really can accommodate more than that. We’ve easily played with 10 – 12 people. The theme is unnecessary but not distracting, and with the variety of edition available you can find one that’s great to play with kids, or for an “adults only” game night.

This is a great game to pull out at parties where someone would normally pull out Scatagories or some sort of trivia game. It’s easy to learn, setup over and over, and it’s very accessible for kids and adults. You won’t be disappointed adding Codenames to your game shelf!