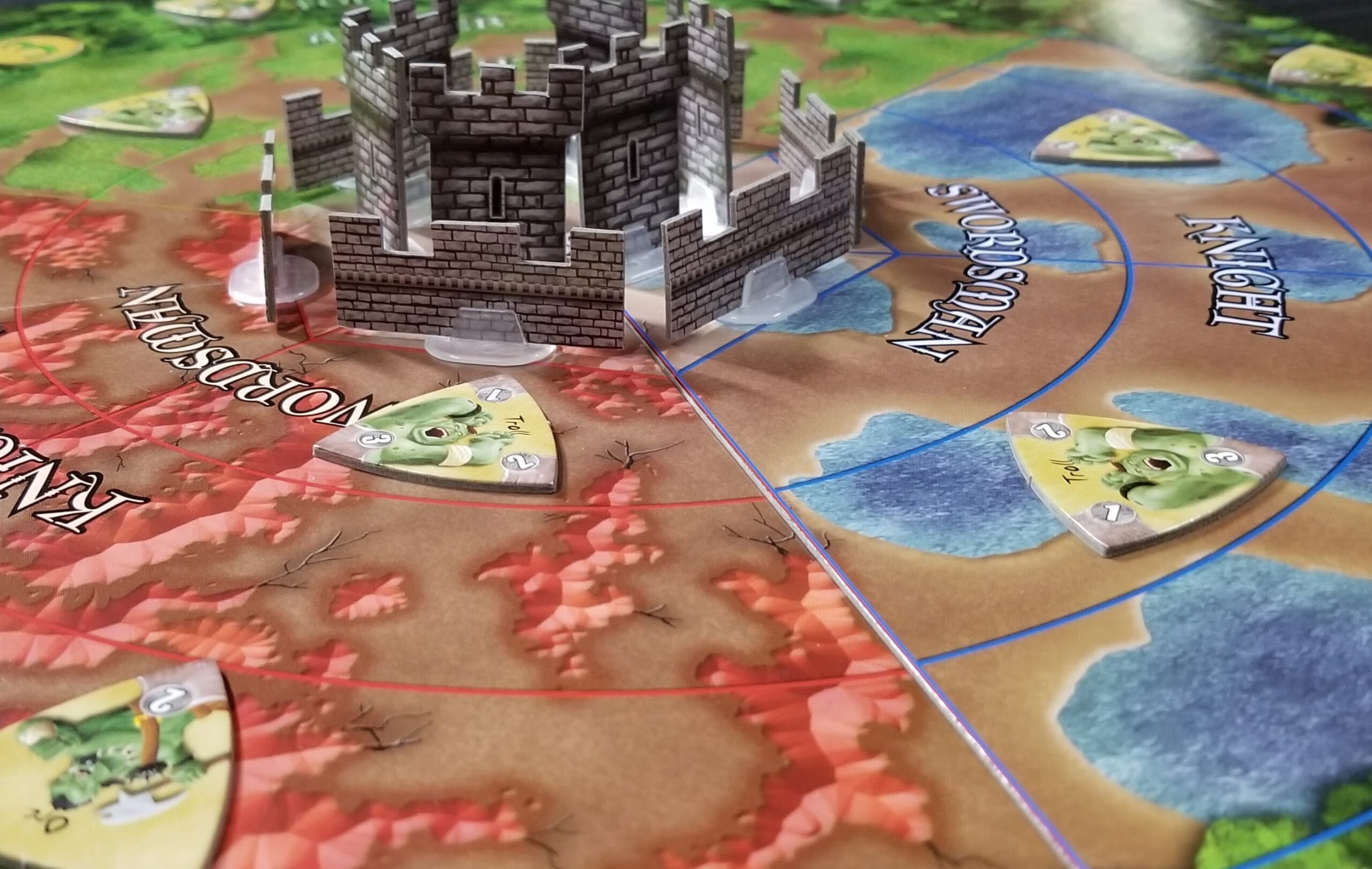 Castle Panic is a cooperative board game that is great for kids and perfect for the whole family. Players work together to defend their castle from monsters that are trying to destroy it. This game is great for teaching teamwork and problem-solving skills. In this post, we will discuss the gameplay of Castle Panic and why we think it is the best Co-op Board game for kids!

In Castle Panic your team works together to keep a horde of advancing monsters from overrunning your castle. The board consists of a series of concentric rings, like a dartboard, with your castle towers at the bullseye. The board is also color coded, dividing the battlefield into three sections.

The monsters start in the Forest (outermost) ring, and after each player turn they advance one ring. After each turn you also add more monsters! The rings are named for the type of defender who can hit a monster in that ring (Archer, Knight, Swordsman).

To defeat the monsters you have to play cards from your hand that correspond to the ring and color the monster is currently in. For example, you can play a Blue Knight to hit a monster in that section of the board.

The teamwork comes into play when players trade cards in order to make the best use of what they have available as a team. Trading cards allows you to make use of cards that play now, and setup other players for where the monsters will be in future rounds.

Like all co-op board games players win or lose as a team. If you want to add a little friendly competition the game has a mechanic where players keep each monster they slay to determine who is the “Master Slayer”. This is a completely optional mechanic, and it’s something we leave out when we play.

You have six towers to defend, and you start with a wall in front of each of them. If monster hits a wall or a tower the monster takes damage, but you also lose the structure. Walls can be rebuilt (if the team manages to get both a Brick and a Mortar card to one player) but once a tower is lost is is gone forever.

The monsters have varying degrees of strength, it only takes one hit to slay a goblin, but three hits to slay a troll. The game has a really clever mechanic for tracking a monster’s health.

There are numbers on the corners of the monster tokens. Monsters always start with their highest number facing the castle. As the monster takes damage you just rotate them. Something easy for kids to do and understand.

The Anatomy of a Turn

On a player’s turn they can take several actions, such as drawing new cards, trading cards, and playing cards to attack monsters or rebuild walls. The number of cards you’re allowed to draw or trade depends on the number of players. There are also some very helpful action cards that allow you to do things like keep a monster from moving this turn, or push them back to the forest.

As a team you need to decide what to play and when to play it. This helps to teach children teamwork, communication and strategy. It also has the added advantage of being fun for the adults too.

How do you win?

You win Castle Panic if you manage to slay all of the monsters with at least one tower of your castle still standing.

Castle Panic is a lot of fun! It’s a great game and a good way to introduce kids to Co-op board gaming. As with most Co-op games it can be difficult to win. The board gets a turn after every player turn and things can get really intense. As you get better at the game there are a number of expansions you can add to up the complexity. I’ll cover those next.

Are there Expansions for Castle Panic?

There are a number of expansions for Castle Panic. Our favorite is the Wizards Tower expansions which allows players to trade one of their resource cards for help from the Wizards Guild. The Wizard cards can be very powerful but to balance the game, the expansion also comes with more powerful monsters.

We have also played the Engines of War expansion which allows you to build weapons like catapults and traps to help you defeat the monsters. Be careful though, because the monsters can build weapons and barracks as well.

The expansions can all be played separately or, if you want a real challenge, together.

What Ages is Castle Panic Good For?

The original Castle Panic game is rated for ages 10 and up, but we’ve played with my seven year-old niece and she needed very little help. The expansions have an age recommendation of 12 and up.

If you’re looking for something for younger kids, check out My First Castle Panic which requires no reading and is recommended for children 4 and up. It teaches matching, strategic thinking and taking turns. Also, since it’s cooperative there are no losers!

Can I play Castle Panic Online?

Yes, Castle Panic is available to be played online at Tabletopia.com, but the game is best played in person!

Is Castle Panic Worth the Money?

Yes, I think Castle Panic is worth the money. Not only is it a great game to play with children, but it also plays up to six players so it’s good when you have a fairly large group. As the game has gained in popularity the cost has come down some. You should be able to find it for around $25, with the expansions running around $15-$20. The components are cardboard, so they will wear out over time especially if you play a lot. If you play that much though, you’ve probably gotten more than $25 worth of fun out of it!

I hope you can see how Castle Panic is a fun and challenging game for the whole family. Players must work together in order to defend their castle from monsters and it’s a great game for teaching kids teamwork, communication and strategic thinking.

The best part is that players either win or lose together, making it a truly cooperative experience. You’ll never feel left out or frustrated when playing Castle Panic. Plus, the Master Slayer title is pretty impressive!

Pick up a copy of Castle Panic today for your next family game night!