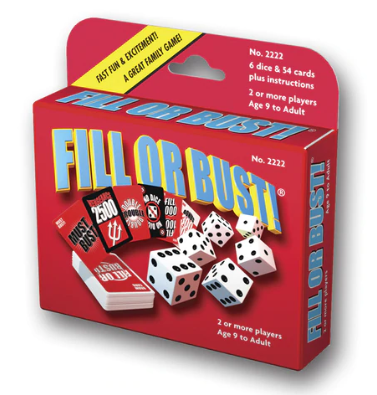 I grew up playing games with my Grandparents whenever I would visit.  We played many different games, but one of my Grandfather’s favorites was a game he simply called “dice”. There was hardly a visit that went by where he didn’t say “want to play some dice?”.  I have many fond memories of pressing my luck and rolling dice at my grandparent’s dining room table.

The game my Grandfather simply called “dice” was very straight-forward. All you needed were six, six-sided dice and pen and paper to keep score. The game we used to play is very similar to a game you can find today called Fill or Bust, which was originally released in 1981 by Bowman Games.  Fill or bust adds a deck of cards which gives you an additional way to score and more motivation to press your luck.

If you enjoy dice games, this is one you may want to try. It is a lot of fun, can be played with large groups and is good for people of all ages.

How to Play Fill or Bust

Fill or Bust is a press-your-luck style card and dice game played with six, six-sided dice. You roll all six dice at once and you must keep at least one die that scores. You can then either stop rolling and bank those points, or roll the remaining dice and see if you can get more points. If ever you roll the dice and have nothing that scores, you “Bust” and you lose all of the points you didn’t bank.

The following combinations of dice are worth points in Fill or Bust.

You must get a combination on a single roll in order to score (you can’t build up to three 4’s for example). You can only get a straight on the first roll of a turn because it requires all six dice. Grandpa’s version of the game also scored three pair, but Fill or Bust doesn’t score this combination of dice.

If you manage, through one roll or multiple, to get all of your dice to score you have “Filled the Dice“.

How Many Cards Come in the Game Fill or Bust?

Filler or Bust adds a deck of 54 cards to the game which adds a really fun mechanic. The player must turn over the top card of the deck before their first roll. Possible cards are:

If you fill the dice you must flip another card before you get keep rolling. It may be more bonus points, but it could also be a No Dice, and you lose it all.

Tips for Winning Fill or Bust?

When someone reaches 10,000 points that triggers the end of the game, All of the other players get one more turn to try to beat the final score of the player who “went out”. The highest score after this final round is the winner. Here are some tips for winning:

Can I play Fill or Bust Online?

No, I am not aware of any place you can currently play Fill or Bust online.

Is Fill or Bust Worth the Money?

Honestly, if you have six dice and a pad of paper you can play Grandpa’s version right now. This game really is better as a card and dice game than with dice alone. I think the addition of deck of cards really adds a fun mechanic to the game, and gives people more reason to press their luck. The game can usually be found for less than $10, so I’d recommend picking it up.

How Many People Can Play Fill or Bust?

Fill or Bust a game that any number of people can play, but it is best with ten or less. If you have more people than that, optional rules are included for team play and tournament play.

Where to Buy the Fill or Bust Game?

This game could not be found on Amazon at the time of this writing, but you should be able to pick it up at Walmart or Target. You can also get it from the official site.

There are some other great dice games you may want to try if you’re a Fill or Bust Fan. They don’t accommodate as many players as Fill or Bust, but some of them I like even more if I have a smaller group.

This is a fantastic game that will be getting it’s own full post soon. It’s the third installment in the “clever” series of games. Roll the dice, then place them into the matching colored area, create difficult chain-scoring possibilities, and rack up the points. Every die that’s smaller than the chosen one may be utilized by other players, ensuring that everyone stays in the game at all times.

read our review
check price of Twice as Clever

A fast-paced dice game for 2-5 players where all of the players are engaged no matter which player’s turn it is. In this game each player has a score sheet with four different colored rows with the numbers 2-12. On each turn the active player rolls two white dice and a number of colored dice. Any player can mark off the sum of the white dice on any row of their sheet. The active player can take the sum of one of the white dice and any one of the colored dice. The trick is, once you’ve marked off a number you can no longer mark off any number to the left of it. You get points based on how many numbers you can mark off in each row. Great quick game, takes about five minutes to teach and about 15 minutes to play.

Another game that is quick to teach and play. Flip up four cards which each contain a picture of a set of dice and a point value. All players roll at the same time and one by one place dice matching the pictured dice next to each card they want to try to win. On the next turn all players roll their remaining dice trying to get what they need to complete their card. Want to pull your dice back and try another strategy, you can, but you have to pull ALL of your dice back and skip a turn. We play this one a lot when we want something light.

check price of roll for it

I like Fill or Bust for a lot of reasons. It’s a great family game that combines luck and strategy. It’s quick to teach and accommodates any number of players so it’s good for parties and large groups. It also has a small footprint so it’s easy to take with you when you’re traveling or don’t have a lot of space to play. It’s a game you can play for half an hour or half a day. It can be a bit difficult to find so you may want to try one of the other dice games mentioned until you come across it. For me, there is also something a bit nostalgic about Fill or Bust, so this game will probably always be on our shelf.