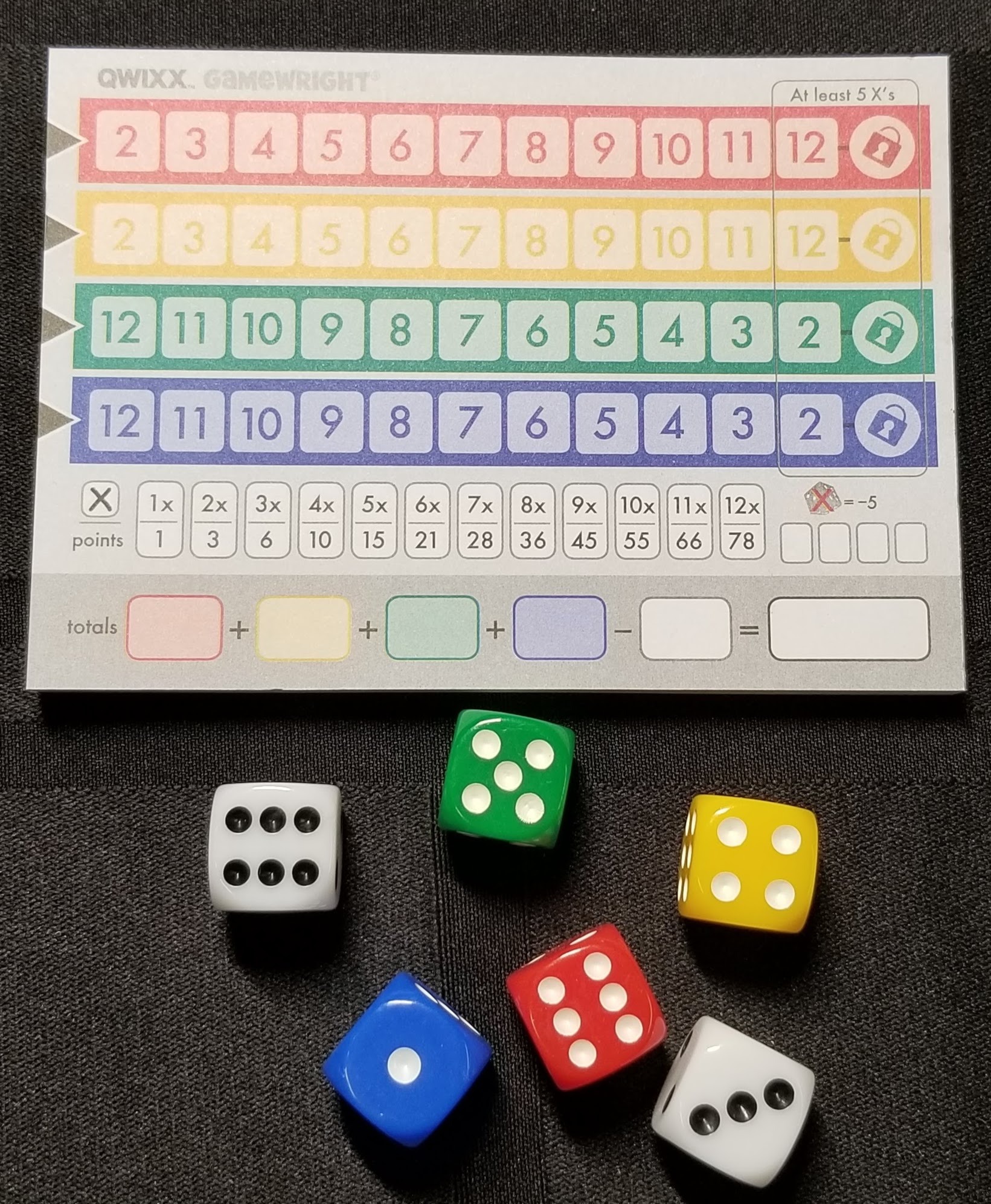 Looking for a fun and addictive game to play with your friends? Look no further than qwixx! The game is simple but gameplay is still strategic, just because you can score a number, doesn’t mean you should. This roll and write game from Gamewright games, has a quick playtime, easy rules, and plays up to five players. Let’s take a closer look a Qwixx and see if it’s right for your table.

How to Play Qwixx

In Quixx each player plays on their own sheet of paper which contains four colored rows of numbers. Two of the rows are numbered from 2-12 and two from 12-2.

The goal of the game is to mark as many numbers as you can in each row working left to right. You have to be strategic about when you mark each number because once you have marked off a number in a row, you can no longer mark the numbers to the left of it.

One of the great things about Qwixx is all of the players are engaged during every turn. The player rolling the dice is called the active player, and everyone else is a passive player.

On each turn the active player rolls two white dice and one dice corresponding to each color row on the scoresheet. They then announce the sum of the white dice to the table. Any player (including the active player) may mark off that number in any row if they choose to, this is not mandatory.

Passive players are free to not mark any numbers, but the active player must mark a number off on their turn or take a penalty.

The first player to cross off the rightmost number in any row (be it a 2 or a 12) locks that row. Once a row is locked all players cross off the lock symbol and no one can score any additional numbers in that row.

No player is allowed to score the rightmost number in a row until they have at least five other numbers in that row crossed off.

When Does Qwixx End?

The game ends when either:

Qwixx is very simple to score. You simply count the number of X’s in each row and consult the chart to see how many points each row is worth. Any penalties you took cost you 5 points each. It’s that simple.

Can you Play Qwixx with Two Players?

Yes, Qwixx plays with 2-5 players, but it’s probably best with four players. I can think you could also stretch this to six players, but we have not tried that yet.

Can you Play Qwixx Online?

There currently isn’t anywhere where Qwixx can be played online.

Is Qwixx Worth the Money?

Qwixx is a consumable game, each time you play you’re going to use up score sheets. That said the last set I bought was under $8 so it’s a good value for the number of plays you’ll get out of the box (the scoresheets are double-sided). You can also extend the life of a set by making copies of the scoresheets or by laminating a set of sheets and using dry erase markers. It is also a game that is pretty easy to find, you should be able to pick it up at Target or Walmart, or have it shipped from Amazon

Qwixx is a great game for people who are looking for a fast-paced, easy-to-learn dice game. It’s a light game that can be played in around fifteen minutes but still makes you think, and forces you to make tough choices. You’ll often find yourself thinking “is it too early to take a 7?”. Qwixx is worth checking out, especially as inexpensive as it is.

I hope you’ve found this Qwixx review helpful and that you give this simple roll and write a try!