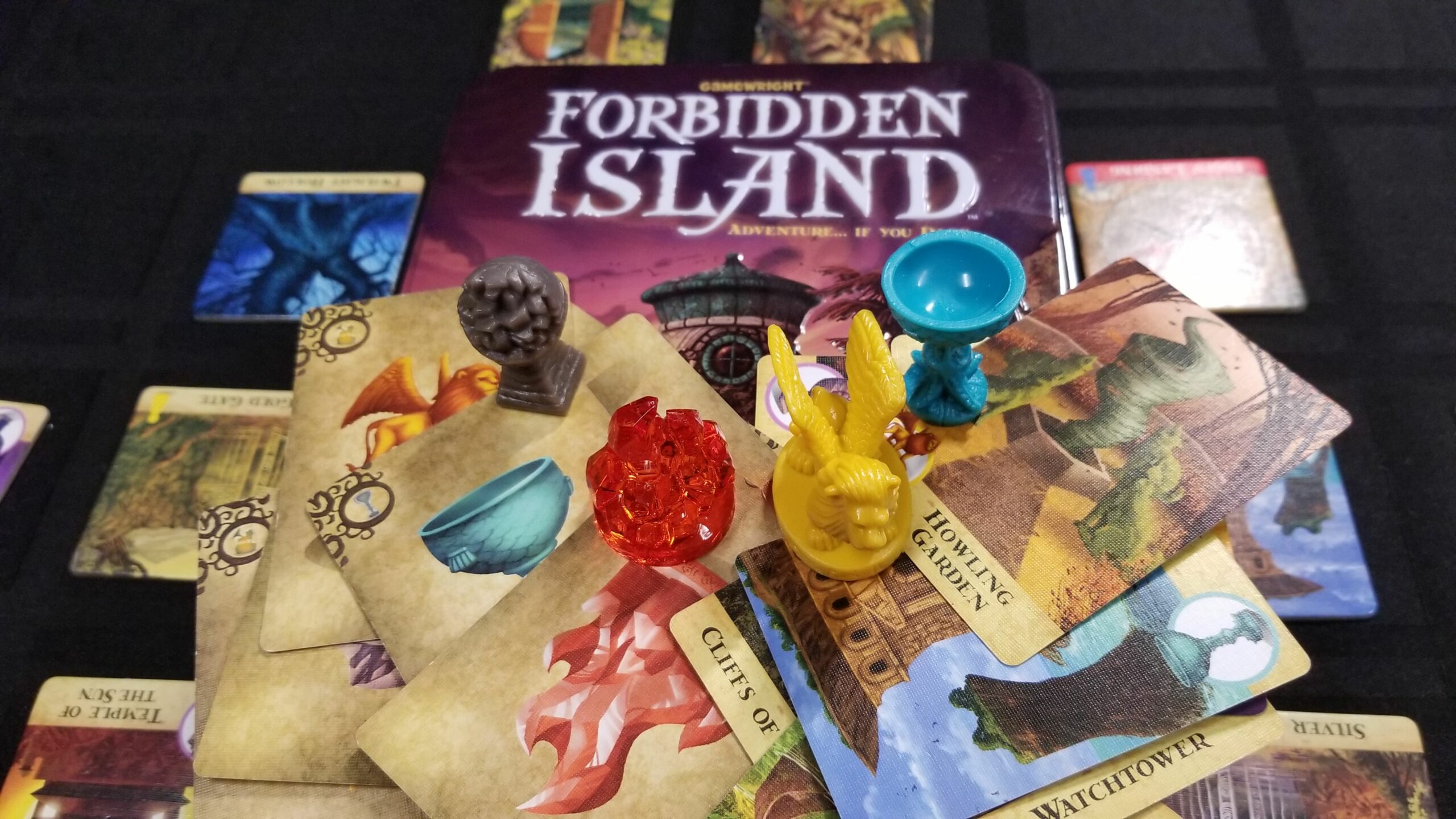 Forbidden Island is a cooperative board game for two to four players. It’s designed by Matt Leacock, the creator of Pandemic, and it’s published by Gamewright. The goal of the game is to collect four treasures from the island and escape before the island sinks.

When I want to introduce new people to Co-Op gaming, this is the game I grab off the shelf. This game is perfect for beginners, because it is easy to learn, but still provides a challenging and fun experience.

How to Play Forbidden Island

The island you are exploring is made up of 24 location tiles that are shuffled and randomly arranged in a pattern like this:

There is also a deck of cards called the flood deck which contains one card for each location on the island. To finish the setup of the board, draw six cards from the flood deck and turn those tiles over. These tiles are now flooded. If they come up again before they are “shored up” (turned back over) they sink and are removed from the board.

After each player turn you will draw more cards from the flood deck, so you’ll need to start shoring things up quickly or you’ll soon find yourselves under water! The number of card you draw is denoted by the water level tracker.

On their turn the players can take up to four actions, with the available actions being:

In addition to these four possible actions, each player has a special action as an option (it’s an additional possible action, not a fifth action on a turn). These are based on the players role. Don’t overlook these when strategizing they can really be a game changer. Some roles let you move or shore up diagonally, some let you fly to non-adjacent tiles etc. Make sure everyone knows what everyone else’s special ability is. We typically start each game by having everyone read off their special skill.

Where the players start on the Island is also determined by their role. Each color pawn is pictured on one of the tiles and that’s where that player starts. There are also eight location tiles that have one of the treasures pictured on them. Once a player has collected five of the same treasure card they must make their way to one of the locations where that treasure is pictured to collect that item.

Other Special Cards in Forbidden Island

In addition to the treasure cards there are three other special card types in the deck, two of them help the players, one of them helps the board. We’ll start with the good cards:

Helicopter Lift: Let’s you fly from your tile to any other tile on the board (you can take anyone on your same tile with you if you’d like)

Sandbags: Allows you do shore up any tile on the board (you don’t have to be adjacent to it)

These can be played at any time. They do not have to be played on your turn and they do not use an action. Use them wisely.

The card you don’t want to see when playing this game is Waters Rise. When this card comes up you shuffle the flood deck discard pile and put it back on top the flood deck. This increases the chances that already flooded locations will come up again and sink. This card also causes the level of the Water Tracker to go up, which will eventually make you draw more flood cards on each turn.

Eventually the island starts to sink faster and faster! It can get pretty intense!

How do you win Forbidden Island?

The goal of Forbidden Island is to collect all four treasures and get everyone safely to the Fool’s Landing tile. Once you get everyone to Fools Landing, someone must also have a Helicopter lift card to fly everyone off the island.

That is the only win condition. As with most Co-Op board games, there is one way to win and many ways to lose.

How do you Lose Forbidden Island?

Co-Op games are designed to be inherently difficult because the players have the advantage of multiple minds working together. As such, there are many ways you can lose this game:

Why is Forbidden Island so Popular?

Many people like Forbidden Island because it is a Co-Op game that is not overly complicated but remains challenging. As you get more experienced you can increase the difficulty by starting the water level tracker at a higher level. In addition, the random layout of the Island makes the game different each time you play.

How do I know if I’ll like Forbidden Island?

Forbidden Island is a great family game encouraging communication and teamwork. Just be careful not to let one or two players dominate the decision making in the excitement of it all. Even if you have younger kids this game can be good (but honestly, the best co-op game for kids in my opinion is Castle Panic).

This game is also good for groups with players who don’t like games that are competitive. The game is easy to learn and does not take too long to play (30-45 min). If you like games with strategy or you like puzzles, Forbidden Island is for you!

Is Forbidden Island Worth the Money?

Yes, Forbidden Island is worth the money! It actually is not very expensive as far as Cooperative board games go, you can typically find it for around $18 – $25.

Some points to consider:

Forbidden Island really is an excellent game, and a great place to start on your path to playing better games. As I mentioned it’s typically where my wife and I start when bringing new people into the hobby. We hope this article has helped you understand how to play Forbidden Island, and why it’s such a great cooperative board game for beginners. If you’re looking for a challenging and fun game to play with friends or family, we highly recommend Forbidden Island!