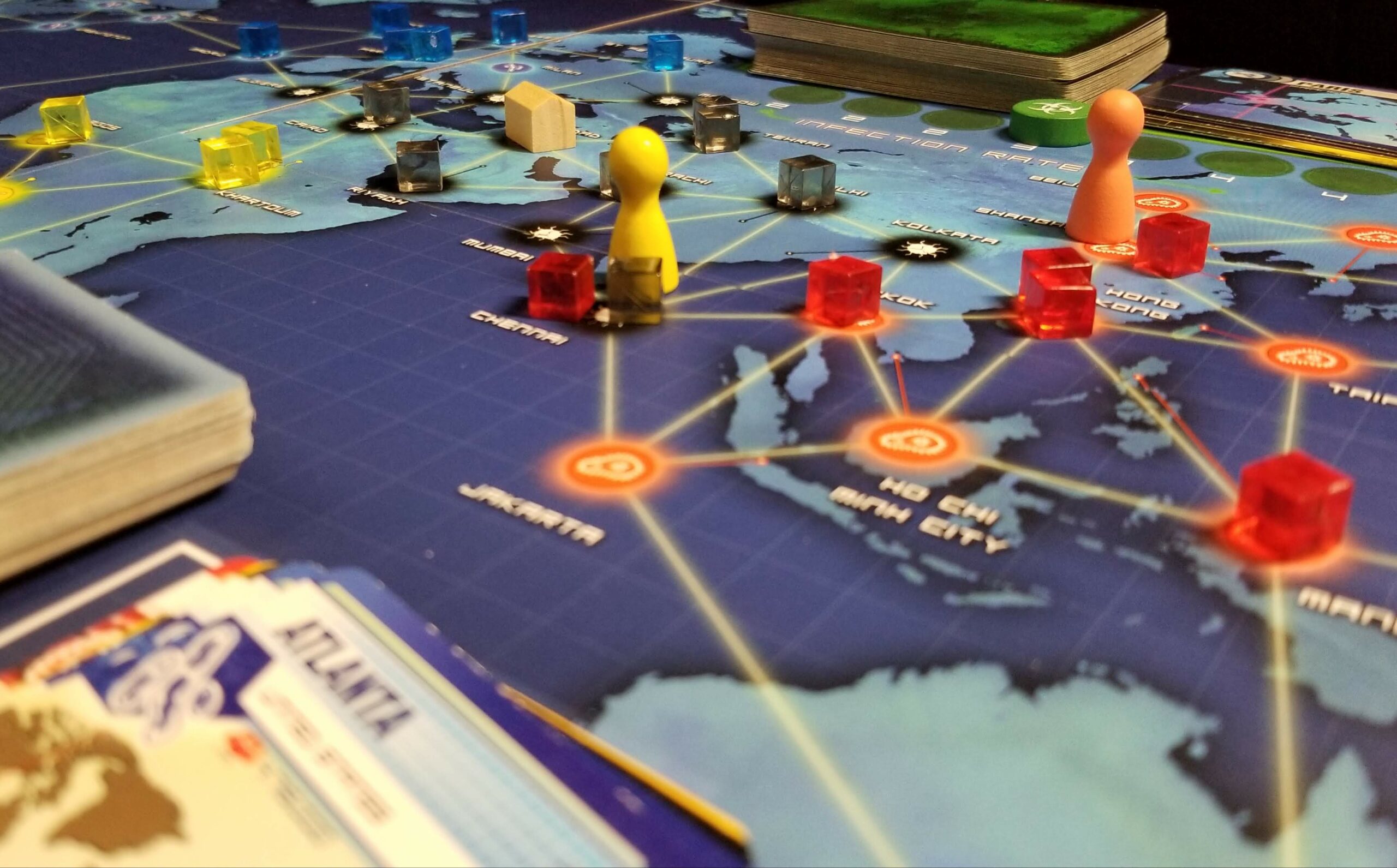 I think Pandemic was the first Co-Op board game I ever played. These days I recommend people start with Forbidden Island for their first Co-Op game (a game by the same designer), but Pandemic has quickly become the “standard” Co-Op board game, and it’s also a good place to start. It used to be that Pandemic could only be found in specialty game stores, but you can now find it on the shelves of Walmart and Target, so it should be easy to find if you decide Pandemic is a good fit for your table.

What is the Pandemic Board Game?

In Pandemic, players work together to try to save the world from a series of deadly diseases. It is a challenging and suspenseful Co-Op board game for 2-4 players and takes about an hour to play (90 minutes if the players are new). The game requires a lot of teamwork and strategy, with the players deciding as a team how to best use their special abilities and the cards they have available. Whether you are a seasoned gamer or just getting started, you will find that Pandemic is a lot of fun!

How to Setup Pandemic

Give out the player roles: Shuffle the role cards and randomly give one to each player along with the pawn of the matching color. The roles give each plater a special ability that only they can preform. For your first game we recommend you make sure someone has the Medic role and someone has the Researcher role. The game is much harder without these two roles. Also give each player a reference card (so they know which actions they can take on their turns).

Infect cities: Shuffle the infection deck and draw a total of nine cards.

The cubes you place should match the color of the city drawn. Place the drawn cards in the infection discard space, and place the remaining deck next to the discard pile.

Marker placement: There are three different trackers on the board that have markers to help you keep track of statuses (Infection rate, outbreak tracker, discovered cures). Place the outbreak marker on zero, the infection rate marker on the left-most “2”, and place the cure vials near the cure tracker. As diseases are cured you’ll put the vial on the board, when they are eradicated you’ll flip the vial to show the eradiated symbol.

Starting position: Place a research station in Atlanta (where the CDC is located) and place all of the player pawns there. Place the disease cubes in easy reach (we typically put each color at the corner of the board where they color is predominate).

You’re now ready to start playing! The starting player is the player that has the card with the highest population in their starting hand (don’t worry, it’s on the card).

How to Play Pandemic

Playing Pandemic is very similar to playing Forbidden Island with some added rules around movement, and multiple uses for your cards. In order to discover a cure for a disease the team must get five cards of one color to a single player, and that player must get to a research station.

During a player’s turn they can take up to four actions, skipped actions are lost. Your action options are:

The movement in Pandemic is slightly more involved because in addition to moving to adjacent cities, players can use cards in their hand to fly around the board. You can use a city card to either fly from anywhere on the board to that city (direct flight) or fly from that city to anywhere on the board (charter flight). Players can also fly between research stations (shuttle flight).

After performing their actions the player draws two new cards from the player deck. There is a strict hand limit of seven cards. If drawing these two cards puts you over this hand limit, you must immediately choose cards to discard to bring you to seven cards.

When a city card is used for any purpose (movement, research station or cure disease) it is discarded.

After each player turn, the board gets a turn. During the boards turn you will draw a number of cards from the infection deck equal to the current value of the infection rate track. For each city revealed this way you will place a disease cube of that cities color in that city.

When a city would receive it’s fourth cube an outbreak occurs and each adjacent city gets a cube instead. When this happens increase the count on outbreak tracker. The disease that outbreaks spreads to all adjacent cities even if the adjacent city is a different color. It is possible for a city to be infected with more than one disease.

The team must work together to discover the cures for all four diseases before running out of time, or letting the disease spread get out of control.

How Difficult is the game Pandemic?

Most Co-Op board games are designed to be difficult because with all the players working together the only challenge comes from the board. If you win all the time, where is the fun in that? The difficulty of the game can be adjusted by adding or removing epidemic cards. There are six in total, for an easier game only use four of them, as you get better at the game add more!

The game is made more difficult due to the fact that there are multiple uses for the cards in your hand. You need to get five cards of one color to a single player in order to cure a disease, but you can also use these cards to fly around to board and to build additional research stations. Part of the strategy of this game is determining the best use of the limited cards you have as a team.

There are also a lot of expansions available for Pandemic that add new mechanics and increased difficulty. We’ll cover the expansions in a bit.

How do you win Pandemic?

The game is won when the team has cured all four diseases. You don’t have to remove all of the disease cubes from the board to win the game, you just have to discover all of the cures.

There is however, an advantage to clearing the board of a color. When a disease has been cured, and all of it’s cubes have been removed from the board, it is considered eradicated. When a disease has been eradicated you no longer place that color on the board when a city of that color comes up in the infection deck. This can give the team a much needed reprieve as the remaining infections spread!

How do you lose Pandemic?

As with most Co-Op board games there is one way to win, and many ways to lose.

You lose Pandemic if:

Is Pandemic easier with more players?

The game is easier with more players. This is because you have more player roles in use, which gives the team more special abilities they can leverage. In addition, more players means more minds trying to solve the puzzle.

Everyone we have introduced Pandemic to has enjoyed playing it. If you like strategic games with a high level of teamwork this is certainly a game you should try.

Is the game Pandemic worth the money?

Pandemic is definitely worth the money. As the game hit the mainstream it’s availability has increased and it’s cost has gone down. It is not uncommon to find this game for around $35. Pandemic has a good replay value, especially with the expansions, but the replay value of the base game is more limited than some other Co-Op games.

Randomizing player roles and adjusting the difficulty adds some variability to future playthroughs, but as you get better at the game it really becomes more of a puzzle to solve. That being said, you will get a lot of playtime out of the game before you feel the need to add an expansion to keep it interesting. The components are well made and will last a long time.

What Expansions are Available for Pandemic?

As with any popular game the publisher has made many expansions (and versions of the game) available to fans. At the time of this post there are three expansions available for the game:

On the Brink: This expansion introduces three new options you can play with, a Virulent Strain that becomes more difficult to treat, an unpredictable fifth disease with mutations, and a game mode with a fifth player playing as a bio-terrorist spreading a fifth disease. This is the expansion we play with most often and is where I would start. It also comes with some nice “petri dishes” to store your disease cubes. We’ve actually moved our base game into the On the Brink Box.

In The Lab: This expansion requires both the base game and the On the Brink expansion in order to be played. It introduces a solo mode for a one player option and also a team variation where players split into rival teams. The goal is still to cure all of the diseases, but the teams gain prestige for being the team that discovers the cure.

State of Emergency: This expansion contains rules for playing with up to seven players, as well as new roles and events. It also gives you the option to quarantine cities in your attempt to slow the spread of the deadly diseases

All of these expansions bring additional challenges and increase the replay value of the game.

What are the four diseases in Pandemic?

The four diseases in Pandemic don’t have names, they are simply referenced by color. A lot of tables like to make up names for them, and it is generally accepted that the black cubes represent some kind of zombie plague, you can make up your own names if you like!

What is Pandemic Legacy?

The Pandemic Legacy games are not expansions, they are stand-alone pandemic games that are meant to be played through a single time in 12-24 sessions. The players play through each month in a year with the options of playing through a failed month a second time with additional “funding”. As the game progresses new rules are added and the events that happen are permanent. Cities can panic, riot and be destroyed (denoted by stickers on the board). These conditions make it more difficult or impossible to travel to those cities.

The Legacy versions of this game are a lot of fun and something you should look into if you enjoy the base game. You’ll need a gaming group that meets on a regular basis to play though a Legacy game, but it feels a lot like playing a movie with new challenges and events happening in each month and permanent consequences to your actions.

We may do a review on the Legacy versions in the future, but it may be hard to do one without spoilers!

Overall, Pandemic is a really fun game that is perfect for board gamers who enjoy puzzles and working together as a team. The game can be challenging, but it is definitely worth the money and has a good replay value (especially with the expansions). If you are looking for a new game to try out, we highly recommend giving Pandemic a shot (see what I did there.. 🙂 )!