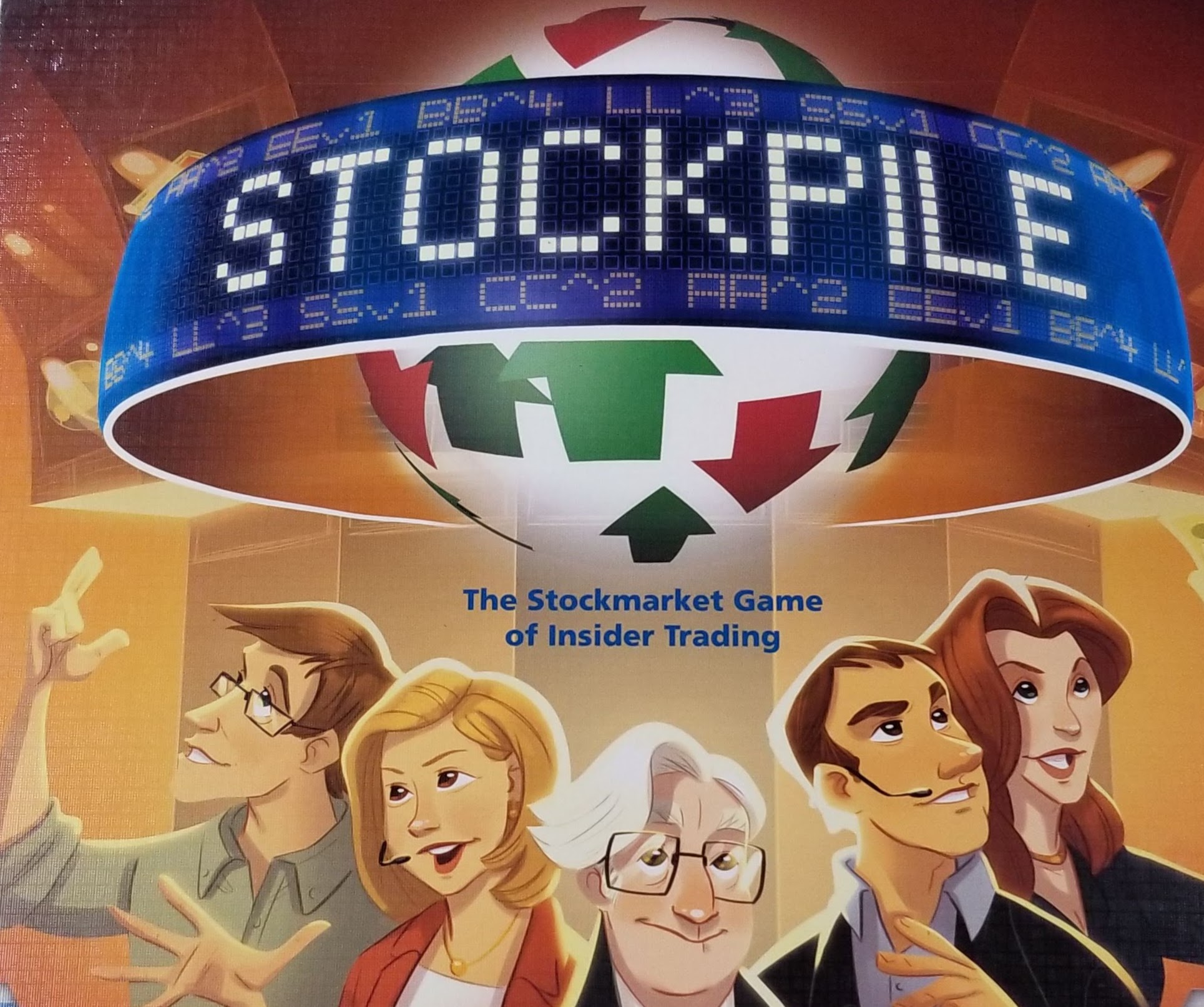 Do you enjoy playing games that involve strategy and risk? Do you love the thrill of the stock market? Now you can get that same excitement from a board game with the game Stockpile. This interactive stock market game is a lot of fun and one of the best, yet most accessible, financial themed games we’ve come across. In this blog post, we explain the gameplay, and discuss how the game makes it so fun to be a (pretend) investor.

Stockpile was created by designers Seth Van Orden and Brett Sobol and published by Nauvoo Games. In the game Stockpile, players are investors in a volatile market. The goal is to have the most money by the end of the game.

The market consists of six different companies players can buy stock in, and it’s controlled by dealing pairs of cards from two different decks. The card from the Forecast deck will state how much the stock is going to move up or down, and the company deck tells you which stock is moving.

Next, the players are dealt two cards from the Market deck. These cards will either be stocks, action cards or trading fees. Players then take turns adding these two cards to “stockpiles”. Stockpiles are how players acquire new stock.

One Stockpile is created per player, starting with a faceup card from the Market Deck. Then in turn order, players add their two Market deck cards to whichever pile(s) they want. The only rule is, one of them has to be placed faceup, and the other facedown.

This gives players another bit of “inside information”. They know one of the facedown cards in one of the piles. Did they hide a stock they wanted for themselves, or did they hid fees they want to stick another player with?

The players now bid on the stockpiles. The only rules are you can’t bid more money than you have, and each bid on a pile has to be higher then the current high bid. The game has a nice mechanic for this where players (in turn order) bid by placing their meeple on the calculator above each pile.

If someone after you outbids you, you’ll have to move your meeple when the bidding comes back around. You are free to either up the bid on your current pile, or move to another pile. Bidding continues until there is one meeple on each pile.

Players look through their pile and do the following:

If a player does not have enough money to pay their fees the fee card stays in front of them and they must pay it as soon as they have the money to do so.

Players now have the opportunity to sell any stock they wish to before the market moves from the forecast deck happen. There is a $10,000 bonus at the end of the game for the player who has the most stock in each company, so there is a balance to be struck between selling and holding. Also it is possible for a stock to split if it gets to it’s max value, but it only happens for stocks players have when the split occurs.

At the end of the game the majority shareholders in each stock are paid, and all stock is liquidated at it’s current price. The player with the most money wins.

Is Stockpile a good teaching tool?

Stockpile can be a good game to teach stock market basics such as:

In my opinion you’d also want to talk about the costs and risks associated with frequently trading stocks etc. I’d also want to talk about diversification and investing for the long term. While I don’t think this game by itself is enough to teach all of the things I’d want to teach about the stock market, it may be a good way to introduce the topic to children and get them interested in learning more.

Stockpile does a good job of simulating the market. We like that it’s a game where you can make choices and take actions, but at the end of the day the market will do what it will do.

We also like that there are different ways to win the game. You can go for long term growth, try to manipulate the market, or go for a quick score.

In addition to the random market moves the game offers ways for players to positively influence their own stock (Stock Boom Card), and negatively impact their opponents (Stock Bust and Trading Fees Cards).

There is also a good mix of public and private information and deduction. You know some of the forecast deck, and you know the possible forecast deck values, so by watching what other players are choosing to sell, you may be able to make an educated guess at what’s going to happen. Sometimes that works, sometimes it doesn’t.

Stock market themed games can often be very complicated. Stockpile does a good job of keeping the mechanics simple without losing any of the excitement or strategy. The game is fairly easy to learn and plays in about 60 minutes. We also like that there is a more complicated version of the board on the backside. As you get better at the game, flip the board over for an increased challenge!

Finally, I just have to point out that I love that the game designers decided to use little laminated cards instead of paper money. It is so much easier to handle and will last a lot longer. I wish more games would do this.

Are there expansions for stockpile?

Yes, there are two expansions for Stockpile which add more complexity to the game. The expansions are modular and you can actually play all of them together if you really want to take the game to the next level.

Illicit Investors offers an “Investment Strategies” module which will influence your actions each round. Falsify earnings, conduct Cowboy Marketing, or Pump-and-Dump a company’s stock.

These expansions can be purchased seperately, but require that you have the base game in order to play them. They are included in the “Epic Edition” of the game.

Can I play stockpile online?

You can play Stockpile online at Tabletopia.com. I have not played the game here but the site says it’s free to play. Playing with the expansions requires a paid membership.

There are also official versions available in the Google Play and Apple Store for $4.99.

Is Stockpile worth the money?

It’s not a bad deal, but I don’t like how it’s packaged now. It used to be you could buy the base game for around $50 and if you liked it, you could add the expansions later. The problem now is the original game is out of print and all you can get is the Epic Edition.

The Epic Edition is not a bad value at $79, it bundles the base game with both expansions and all of the Kickstarter stretch goals into one package. It retails for a couple dollars less than all of those things would have cost if you had bought them individually. Also the replay is VERY high. Not only are there two sides to the board offering different levels of difficulty, but mixing and matching of all of the expansion modules offers a ton of variability.

The problem is, you can’t buy the base game and add on over time. You have to commit to the whole thing at once. As such you may want to try out one of the online versions first to see if you really like it.

For many people the online versions will suffice, and at the $4.99 price tag it’s not a bad deal. I like playing games in person so the I think the move to the higher price point of the physical game is unfortunate.

I love this game. If you’re a fan of the stock market or are looking for an exciting and strategic game to play, I highly recommend Stockpile. It’s easy to learn but difficult to master. I wish you could still buy the base game on it’s own, but anyone who really enjoys this type of game is probably going to want the expansions anyway. The higher price point just ups the barrier of entry a bit.

I don’t expect that Stockpile will ever leave our game shelf. It is a great game that I pull out whenever people say they “like games like Monopoly”. If that’s you, you should really give Stockpile a try.