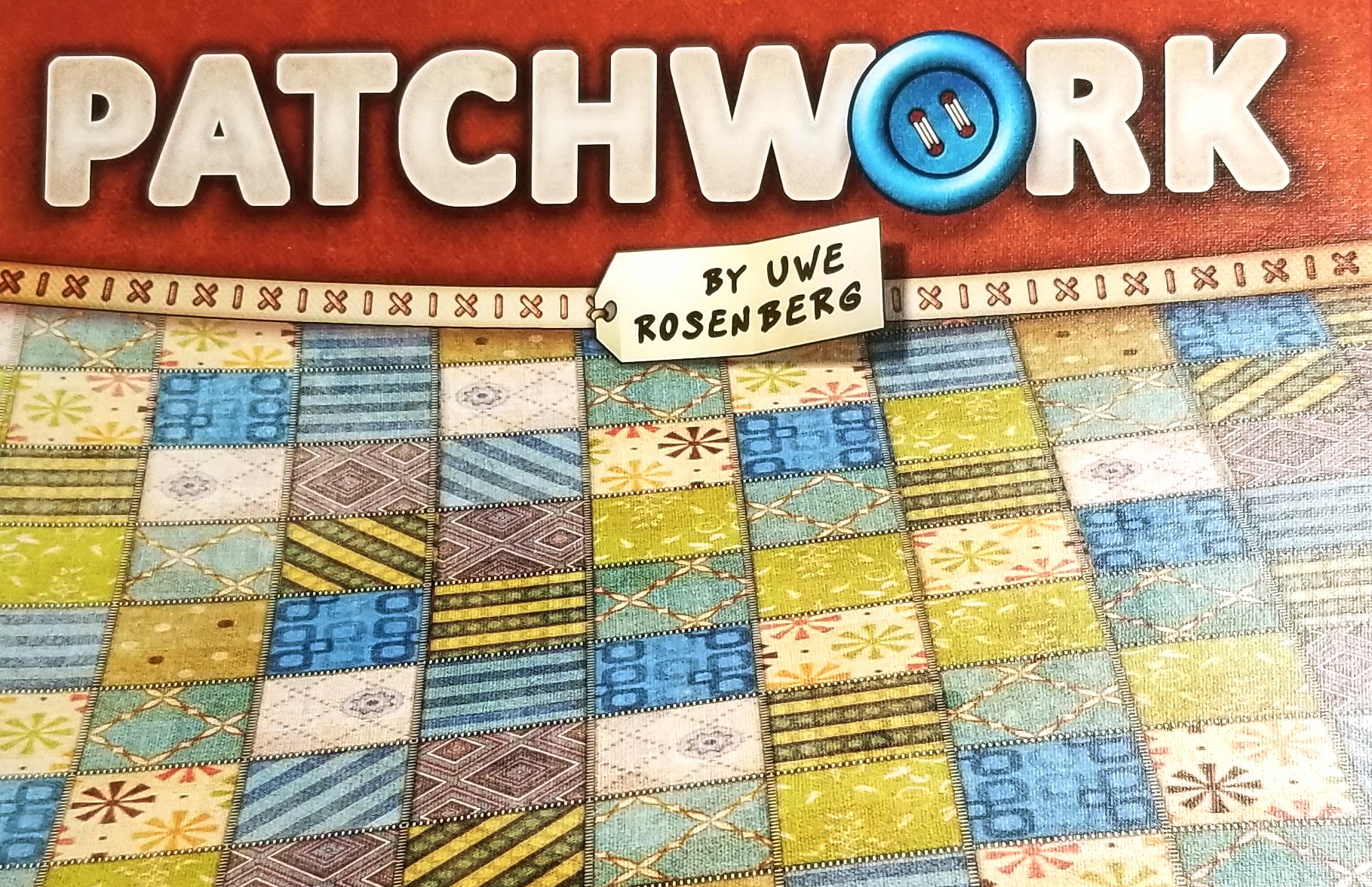 Lately I’ve been a bit fascinated by games designed specifically for two players. It is very interesting to see how a game can be fine-tuned when the designer knows exactly how many people will be playing. The downside is, if I really like a two-player only game I can’t pull them out for the average game night, but it gives Christin and I something interesting to play when it’s just the two of us. After reviewing Fox in the Forest, I decided to try Patchwork as my next sampling of the two-player genre.

Patchwork is a board game for two-players designed by Uwe Rosenberg and released in 2014. In this game players are each making a quilt by drafting from polyomino quilt patches (think Tetris) and placing them on their board. Players are each working with a 9×9 board and must select pieces that not only will fit in the space they have, but will also give them buttons which provide both “buying power” and the victory points.

The Patchwork board game is very simple to setup. Place the time board in the center of the table and arrange all of the quilt pieces in a circle around it. The time board has two sides, they only vary in appearance, so choose whichever side you like better. Place a leather patch on each of the corresponding spaces on the time board, and place the large pawn in front of the smallest patch (the 1×2).

To complete the game setup:

That’s it, you’re ready to play!

How to Play Patchwork

Decide who is going first; that person has their choice of purchasing any of the first three quilt patches in front of the pawn. To purchase a patch, you must pay it’s cost in buttons (a bit strange) and it’s cost in time (makes sense, sewing takes time). Pay your buttons, move your pawn along the time track and place the patch on your board. The patch can go anywhere it will fit without overlapping another piece or running off the side of your board. There are no rules that say you have to start at a corner or place new patches adjacent to existing patches.

After the patch has been places, move the large pawn to the space where the purchases patch was, the next player now has the option to buy one of the next three quilt patches that are now in front of the pawn. The player that goes next is the player that is furtherest behind on the time track, so it’s possible for a player to take two turns in a row if they choose a patch with a small time cost.

At any time if a player does not want to (or can’t) purchase any of the patches available to them, they can instead move their disc along the time track until they are one space ahead of their opponent, and take a button for every space they moved. When. moving along the time track, if you are the first player to pass a leather patch, take it from the time tracker board and immediately place it on your board. Whenever any player passes a button on the time track (even if you’re not the first player to do so) count the number of buttons you have on your player board and take that number of buttons from the supply.

Play continues this way until both players have reached the center of the time tracking board. To score, count your buttons and subtract two buttons for each empty square on your time board, the player with the highest score wins!

Patchwork is very easy to teach, you can give someone a run-down in about five minutes. Each turn there are only two possible actions you will take, buy a patch or move your token. This is a great game to play with people who don’t play a lot of games, it’s very approachable and not intimidating at all.

A game of Patchwork plays in about 20 minutes. If you’re looking for a light filler between heavier games, or you just want something you can play quickly this board game is a great option. It’s also very easy to setup again and play back to back if you’re having a good time with it!

There are two resources you are managing when you play Patchwork, buttons (money) and time. You’ll want to focus on getting buttons unto your board as early as you can because they will pay you more buttons every time you pass a button on the time track, but you can’t spend too much time saving up for those patches because each player only has 53 units of time before the game ends. Each turn were you move without placing a patch you are leaving more of your board open which will result in negative points at the end of the game. Balancing the button and time economies makes the game quite interesting even though the rules are very simple.

The scoring in Patchwork is very straight forward. Count your buttons and subtract two for every square on your board that isn’t covered by a patch. The only other thing to consider is there is a X button bonus for the first player to cover a 7×7 area of their board, but when this is scored you just count these as buttons.

The theme isn’t perfect (quilts don’t generate buttons, nor do you buy things with buttons), but it works pretty well. The concept of a patch on a quilt works well for a Tetris-style game, and it accommodates the dual economy well as it logically would take more time to sew on some patches than others.

This is my biggest knock against the game, the cardboard components are pretty bad. They easily tear when punching them out. I tried a using a light touch, I tried using a lot of pressure, nothing seemed to help. It’s not the end of the world and I know this can happen with cardboard punch-outs, but there are levels of quality when it comes to these. A game like Roll Player also has a lot of cardboard components to punch out, but they are of a much better quality and do not have this issue.

To be fair though, even though it felt like a lot of peices were tearing when I punched them out, when taking pictures for this post I didn’t find many pieces that were damaged. Aside from some frayed edges these are the two worst pieces I could find, and the damage on the second one is very hard to see because of the colors used on that patch.

It also is a shame that they didn’t give us actual buttons to use in this game. It seems like a simple thing and with as often as you handle them, it would have been a nice element. Instead the buttons are also cardboard tokens.

Patchwork has a lot of pieces, and while some of them are large and are fine to just float around in the box, the buttons and leather patches are small. The game came with a single small zip top bag to store the player tokens and pawn which wasn’t enough in my opinion. We typically keep a lot of small bags around for this purpose because a lot of games have this problem.

I don’t remember where we got the ones pictured, but if you want to add additional bags to Patchwork, or any other game you have, something like this would probably work nicely.

There are a few different of editions of Patchwork. You don’t need them all, each on is the same Patchwork board game with differently themed patches. Click on any of the buttons below to check the price of these editions and take a look at the artwork.

The colors of the patches in the game are not relevant. The most important piece of information on the tiles is the number of buttons, which are blue, so they should be easy to see. The scoring tokens are green and yellow, which should not cause a problem for most color blind people, but if so, you could mark one of them.

Can I Play Patchwork Online?

Yes, you can play patchwork online at BoardGameArena.com. The game is free to play, but you without a subscription you have to wait until a paying member requests the game. This usually doesn’t take more than a couple of minutes. If you don’t want to wait an annual membership costs $30.

Is Patchwork Worth the Money?

If you commonly play games with just one other person patchwork is a good game to add to your collection. At it’s suggested retail price of $34.99, it is slightly overpriced based on the quality of the components. The good news is you can regularly find it for cheaper than that. At least online, I don’t think I’ve ever seen it sold at full price, if you check out the current price you’ll likely find it to be reasonable.

Check the current price of patchwork

Overall I enjoyed Patchwork and plan to continue testing out game designed specifically for two players. The component quality certainly leaves something to be desired, but the pieces are serviceable, and didn’t end up with as much damage as I thought they would.. This is a great quick option when you just have two players, especially if you want something that is easy to teach and quick to play. We usually play two or three times in a row before moving onto something else. I will definitely try other offerings by Uwe Rosenberg.