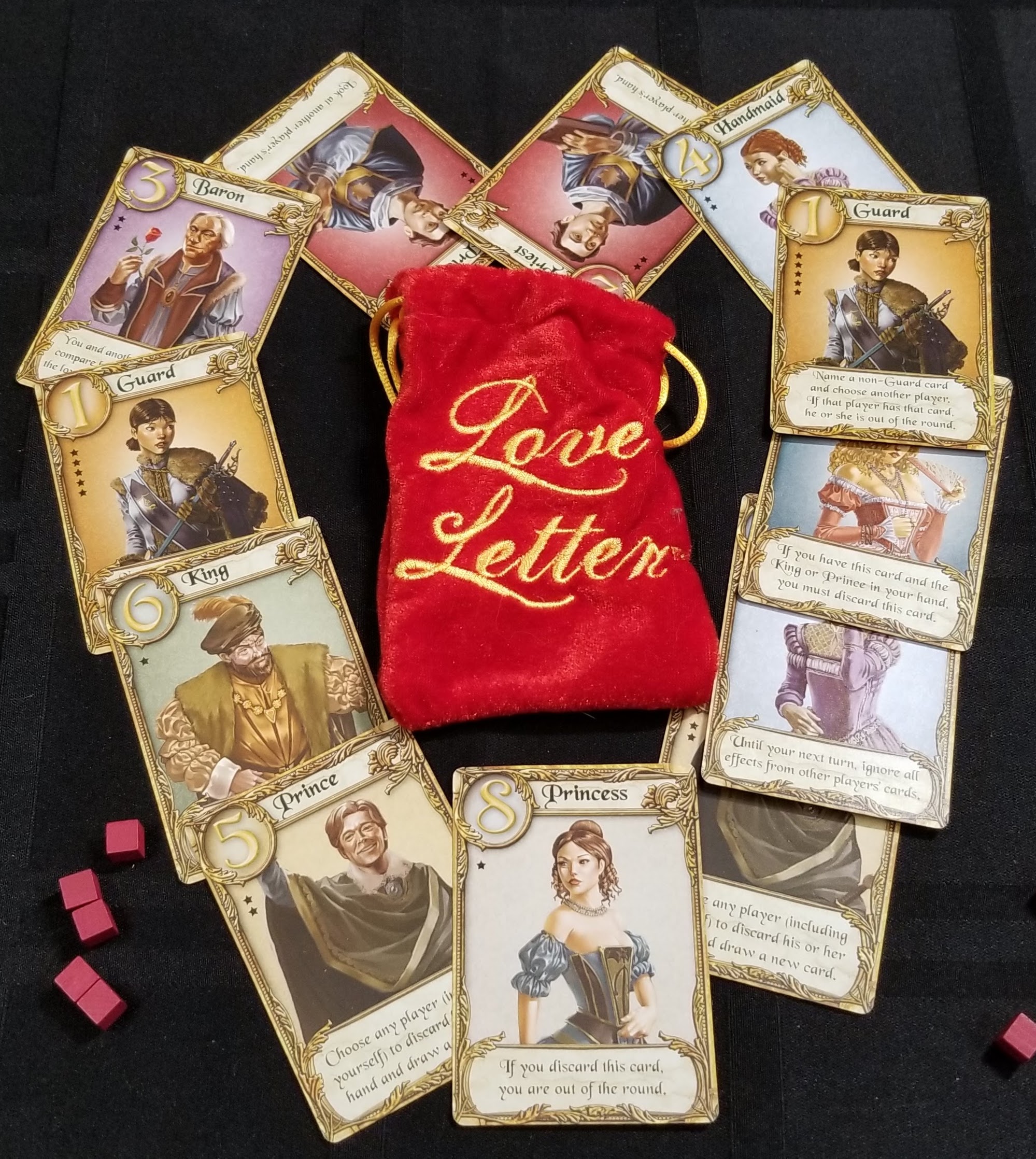 Love Letter is a quick and easy deduction card game for two to four players (the second edition increased the player count to six). The goal of the game is to get your love letter delivered to the princess. The person who successfully delivers the most love letters wins the princess’ heart (and the game).

In this blog post, we will teach you how to play Love Letter, and give you some tips on how to win. So, gather your friends and let’s get started!

What is Love Letter and what do you need to play it?

The Love Letter card game at it’s heart is quite simple. There are only 16 cards in total made up of 8 different card types. Each card type represents a person in the court that can deliver your letter to the princess. The person you hold at the end of the round is the person who you’ve entrusted to deliver your letter

Each role has a number associated with it between one and eight, the higher the number, the closer that person is to the Princess (with the princess herself being the eight).

At the start of the game, is dealt one card. On their turn, each player will draw one card and then choose one card to keep and discard the other. The goal is to keep the highest card you can, but each card also contains an action that is performed when that card is discarded.

Let’s take a look at the cards.

The Cards of Love Letter

There are 16 cards in the Love Letter deck, each card has a value (1-8) and an action. Your goal is the have the highest value card you can in your hand at the end of the round.

Throughout the game you’ll be trying to knock your rivals out of the round, you win by being the last one standing, or by getting your letter to the person closest to the princess when the deck runs out (having the highest value card).

Here is a breakdown of the Love Letter Deck

That’s a lot of cards to keep track of, but luckily the game comes with handy reference cards to remind you of what each card does and how many of each there are.

How to Setup Love Letter

Now deal each player one card. This is their hand, and the person they are trying to convince to carry their letter. That’s it for setup.

The Basic Rules of Love Letter

The game is played in rounds, and each round represents a day. A turn consists of the following steps: draw a card, play (discard) a card, and resolve the effects of the played card.

In the first step, each player draws a card from the deck and adds it to their hand. Then, from those two cards they must choose a card to play face-up in front of them.

The action on the played card is then resolved. The only rules are:

How to Win Love Letter

The game ends when there is only one player left in the round that has not been knocked out, or the deck runs out of cards.

If the deck runs out of cards, the player with the highest value card wins the round and receives a token of affection from the princess. The number of tokens required to win depends on the number of players

Can I Play Love Letter Online?

Love Letter can be played online for free at BoardGameArena.com. There, you can find both the original version of the game, as well as the variant with additional rules for four players. You can also play Love Letter against a computer opponent to practice your deduction skills.

Is Love Letter a Good Game?

If you’re looking for a quick, easy-to-learn game that you can play with friends or family, then Love Letter is a great choice. With its simple rules and short playing time, it’s the perfect game to break out when you’re looking for some lighthearted fun. It’s also easy to carry or keep in your glove box so you always have something to play.

Is Love Letter Worth the Money?

Love Letter is a quick game to teach and play and it is fairly inexpensive. You should be able to find it online for around $12. It is a great game to travel with because of its incredibly small footprint and the art is nice. If it sounds like a game you would like it’s worth picking up. You can buy a copy of Love Letter from Amazon.com

We have the first edition of the game which accommodates up to four players, but if you buy it now you’ll get the second edition which allows for six players. For me, that makes buying this game a no-brainer, since finding good games for six players can be difficult.

How do I Know if I’m Buying the First Edition or the Second Edition?

Not a fan of the romantic theme? Several other editions have been released with different themes. Clicking on any of these will take you to Amazon where you can pick them up!

Jabba’s Palace –  Set in the Star Wars universe, players compete using members of the Rebel Alliance and denizens of Jabba’s Palace to outwit and outlast one another.

Infinity Gauntlet – One player takes on the role of Thanos, 1-5 other players must deploy iconic heroes to defeat him before he can achieve his aims.

Lovecraft Letter – Enter the frightening world of the Cthulhu on a quest to find your missing relative in this Lovecraft edition of Love Letter.

Letters to Santa – I think this one is such a great idea for playing with kids! I might have to buy this one.

If you’re interested in a game that is easy to teach and play but still provides some fun and deduction, then Love Letter is the game for you. It does rely on a bit of luck but there is a decent amount of strategy and bluffing as well. It’s perfect for when you’re looking for something lighthearted and quick, and it can be played with people of all ages. There are also many themes available so you can buy the one that’s right for you!

That’s all there is to playing Love Letter! I hope you enjoyed this guide and that you’ll give the game a try!