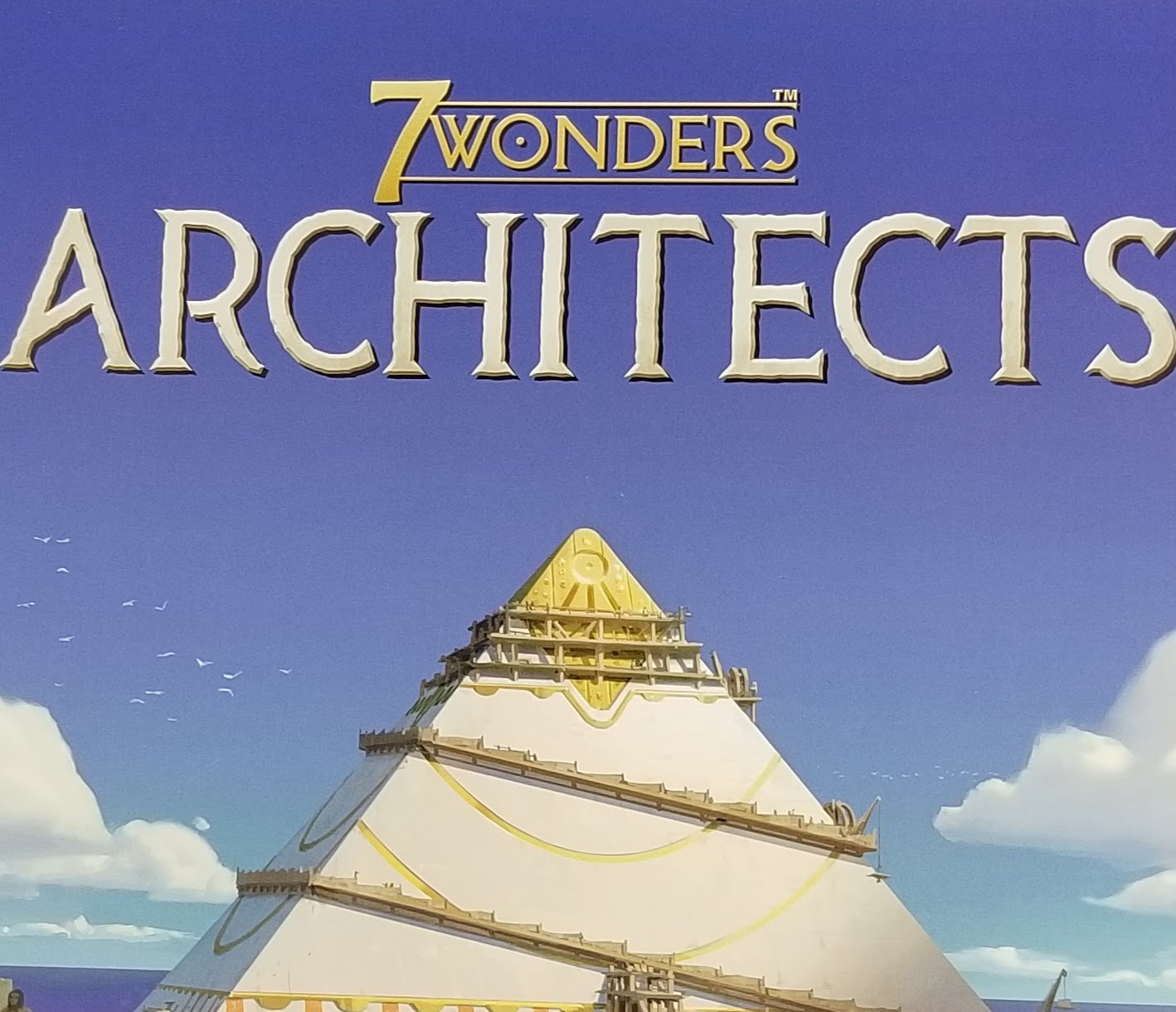 I was excited when I heard that a new streamlined version of 7 Wonders was hitting the market. The original game was released in 2010 and is considered by many to be a classic in the card drafting genre. 7 Wonders has seen a number of expansions and is well-loved in the board gaming community.

For me, 7 Wonders never really hit the mark, I’ll play it but I’d never choose it. I had high hopes that this streamlined version would be the one that I’d be excited to get to the table. I was a bit surprised to see the mixed reviews this game received, and had to try it out for myself. In this review, we’ll discuss the pros and cons of this release and help you decide if this game is right for your table.

7 Wonders Architects is NOT an expansion for the original 7 Wonders game. It is a standalone offering that aims to simplify the original game, while keeping the same overall theme.

In the original 7 Wonders game each player has a hand of cards and all players simultaneously choose one card from the hand and then pass the hand to their left. Cards can be used to increase the resources you receive each turn, or toward progress on building your “wonder”. There is a lot to balance. Players need to keep track of their own resources, but also need to keep track of what their opponents are collecting, because you may not want to pass them cards they need. You also need to decide when to use a card for it’s. resources, or forgo the resources and make progress on your wonder.

In 7 Wonders Architects you’re still trying to build a wonder of the world but the concept of collecting resources is greatly simplified. Instead of requiring specific resources for each stage of your Wonder, the requirement is reduced to something like “2 of the same resource” or “3 different resources”. The card drafting is also very simplified, instead of drafting one of 7 cards, and moving down from there, you only ever have three cards to choose from. The game is basically a race to the finish, as soon as someone completes their wonder the game ends.

We played this game with six players and the game still moved quickly; we were probably done in 25 minutes;. On your turn there are only three possible choices and you don’t have the strategic decisions to make around resources and building types like you have in 7 Wonders. It’s easy to decided what you want to do and play continues. There is also just enough player interaction between the stealing of the cat and the peace/war track to give the game another fun component but keeping things very light overall. This is a good game to play with a group where you want to play something and stay social, the game definitely does not require all of your focus.

The components in this game are very nice and they really thought about storage. Each wonder has it’s own storage container that holds the wonder pieces and the player deck and everything stacks very nicely back into the box. This system makes setup and tear down of the game a breeze, simply pass each player their own box and go. During our last play-though we played more than once and it was very easy for each player to pack up their own box, choose a new one and setup again.

Good as a Gateway Game or for a Social Evening

This game is a VERY stripped down version of 7 Wonders, but simplicity isn’t always bad. If you’re new to the hobby and want an easy intro to card drafting, have kids you want to play, or just want a game that doesn’t completely pull focus and allows for chit-chat this is a great option.

The main criticism of 7 Wonders Architects is that it’s not 7 Wonders. The original game is loved mainly for complexity that comes from it’s strategic choices and pure implementation of the card drafting mechanic. By achieving it’s goal of simplifying the game, 7 Wonders Architects removes a lot of what people love about the original. If you’re someone who loves 7 Wonders or is looking for something complex or highly strategic this is not your game.

Can you play 7 Wonders Architects Online

If you want to give this game a try you can play it for free at Board Game Arena. With a free account you’ll have to wait in the queue until a game is requested by a paid member, but that typically doesn’t take too long. If you want to play faster a subscription to the site is only $30/year.

Is 7 Wonders Architects Worth It?

I would classify 7 Wonders Architects as a family weight gateway game. It’s a good intro to card drafting, You’re only ever drafting a card from three possible choices, and there isn’t a lot of strategy, so you won’t feel overwhelmed. It’s also easy enough for kids to play, they’ll like the race to finish the wonder, and there is some fun interaction of stealing the cat from other players which kids will find fun.

If you’re already a fan of the original 7 Wonders and you’re looking for something similar, stay away from this one unless you specifically want something lighter on your shelf to play with less experienced gamers.

Overall I think there is a place on our shelf for 7 Wonders Architects, we’ll be keeping it. It’s not a highly strategic game but will work well when we want a game that doesn’t take a lot of thought, or have new players at the table. It’s a little expensive for what it is, but I think part of that is the quality of the components and the storage system. Overall, the publisher achieved their goal of making a simplified version of 7 Wonders, and for the right audience I think the game works very well.